For those unfamiliar with Shira Glassman, she’s not only an author of some of the queerest fantasy around, but also my super go-to person when it comes to tough-to-find queer rep. (Her encyclopedic brain for indie queer lit is unmatched. Seriously.) So when I was getting requests for poly fic, I knew who to beg for a guest post of recs, and as always, Shira delivered!

I don’t seek out poly specifically for its own sake, but I have nothing against it, so when it pops up in my LGBT reading searches I’ll read anything that suits my plot, demographics, and setting preferences just as I would with a two-person romance. For those unfamiliar with me in general, my preferences tend toward f/f, fiction with trans people, older men, cultural diversity (especially Jewish stuff), “found family”, costume drama, high fantasy, science fiction, and anything having to do with Central Europe or Florida. As such, here are the top recs from my poly shelf on Goodreads, at least two of which were finalists in the most recent Bi Book Awards:

She Whom I Love by Tess Bowery. Configuration: f/f/m triad; all parties involved with each other, although one of the women is pretty explicitly described, in period-appropriate equivalent terms, as homoromantic bisexual and is in love with the other woman whereas she’s only sexually interested in the man. The setting is Regency England and the book is unusual for a Regency romance not only in its poly triad but in the fact that all three characters are members of the working class: you have a corset maker, a lady’s maid, and an actress (which back then was not treated like royalty the way it is today.) Two women who have been friends since girlhood realize they’re in love with each other just about the same time they start a flirtation with a certain man. When they realize it’s the same man, they play a trick on him for revenge and then the next thing he knows he’s got two girlfriends. This is that story you want if you’re that person who gets frustrated at love triangles and says “why can’t they just ALL DATE?” The book’s main conflict comes from everyone trying to figure out how to make sure they’re being treated with as much respect as they deserve as human beings despite living in a class system that denigrates actresses or people born of sex workers, rather than bullshit manufactured conflict and misunderstandings. I was also impressed by the fact that it had actual adventure and action in the plot instead of just the romance. (Buy it here.)

Kneel, Mr. President by Lauren Gallagher. Configuration: m/m/f triad where all parties are involved with each other. I initially assumed a book with a title this outrageous would be unabashedly silly, but no, far from it — this is actually a fully fleshed out complicated triad romance novel, complete with all the realistic turbulence and angst that any throuple (I’m sorry, I know that’s an awful word but I can’t help myself) would go through while navigating their beginning stages. This is a President/First Lady/Secret Service Former Boyfriend When They Were Navy SEALs Together setup. I was really impressed by how well rounded the book was in terms of character interaction besides the sex, of which, predictably, there is lots. I didn’t get bored by the extra sex scenes, either, since each one introduces a new angle (either within the D/s setup, or a new configuration of how all three of them will interact, since the wife initially starts out just watching, etc.) (Buy it here.)

Chameleon Moon by RoAnna Sylver. Configuration: f/f/f triad including trans woman; all parties involved with each other. Chameleon Moon is temporarily unavailable due to the publisher closing down, but the author will be reissuing it in a new self-published format to be quickly followed by several short stories and a Book Two. The male lead is a lizard man named Regan who will be on-the-page ace in the second edition as the author originally wanted. The female lead, a trans woman lounge-singer-turned-superhero named Evelyn, is involved in a f/f/f triad of all superhero women. They even have a child together of which she is one of the biological parents. The book is a “hopeful dystopian” (the author calls it a dys-hope-ian) taking place in an American city that was quarantined by force when everyone there began developing mutant superpowers in response to an overpresecribed wonderdrug. Evelyn and her superpowered girlfriends and the rest of the characters are fighting to bring happiness and justice to the inhabitants of the city. This isn’t a book with sex scenes; the poly representation is focused on love and family. Warning for deadnaming (which Evelyn defeats like a champ) but it’s possible that may not reappear in the second edition. (Buy it here.)

Midnight at the Orpheus by Alyssa Linn Palmer. Configuration: poly V, a bisexual woman with a girlfriend and a boyfriend. This is 1920’s Chicago gangster noir, and that means it comes with a lot of genre conventions: plenty of violence and death, and an ending that’s happy but highly unstable since her girlfriend and boyfriend are not involved with each other and are both violent people. The setting is very bi-normative in the sense that in this particular underworld culture it’s just accepted that some of the women are dating each other and never assumes that a woman who likes women is uninterested in men. There is also a gay cop antihero who is not part of the triad, so all in all a very queer take on a well-established genre. Warning for Irish and Italian slurs. (Buy it here.)

Ascension by Jacqueline Koyanagi. Configuration: Multiple interlinked poly V’s as part of a found family. This is a book about queer disabled women fighting Big Pharma in space, with strong themes of found family, and the link between bodily autonomy and tough medical decisions. The main character is shown coming to terms with the idea of polyamory as she starts a relationship with a woman who is already involved with someone else, who is also involved with someone else. Warning for loss of family members and also a graphic mutilation flashback. (Buy it here.)

One final note: the Fierce Family anthology is a wonderful collection of sci-fi and fantasy shorts written on the theme of “positive depictions of queer families.” It has plenty of nonbinary representation and families with two moms, and cis m/m isn’t the majority of the stories. I’m mentioning it here because of the story about the space pirates–both the pirates and the ship being attacked have a crew of a bi, poly family. That was just so remarkable that I think it deserves special recognition. The whole anthology is worth it, though. (Buy it here.)

I don’t really have anything of substance of my own to offer as far as poly representation goes, except for a tiny piece of erotica about three Chanukah fairies (“Eitan’s Chord.”) Also, I’m told my witch/tavern owner Eshvat (Climbing the Date Palm) is “solopoly” because she’s aromantic and doesn’t form romantic connections with her casual sexual partners. But maybe some day! (Buy Shira’s books here!) 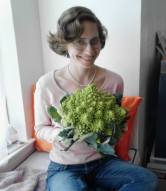 Shira Glassman is a violinist living in Florida with a very good human and a very bad cat. She is best known for writing fluffy queer fantasy that draws inspiration from her tropical upbringing, Jewish heritage and present life, and French and German operas. She believes that we need infinite princess, dragon, and superhero stories for all the demographics who never got to play those roles when she was little; some of the ones she’s written have made it to the finals of the Bi Book Awards and Golden Crown Literary Society awards. Her latest is The Olive Conspiracy, about a queen and her found-family saving their country’s agriculture from a foreign plot.

7 thoughts on “Guest Post: Recommendations for Polyamory in Fiction, by Shira Glassman”