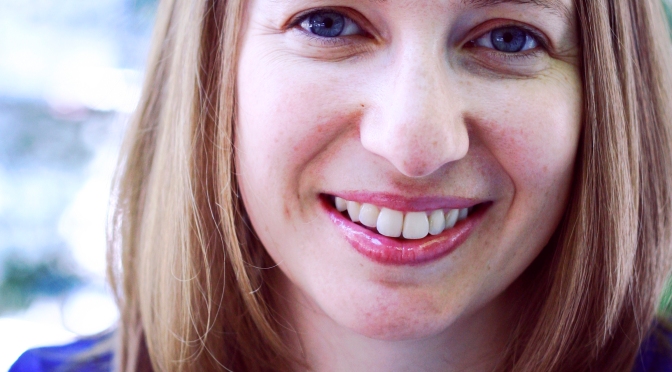 Welcome to Better Know an Author, a feature title I stole from Colbert Report because I miss it so, which will introduce you to a fabulous author of LGBTQIAP+ books every month! This month, the spotlight is on Robin Talley, who just released her newest book, Our Own Private Universe! Robin is an extremely prolific author of LGBTQ YA, as well as a huge reader and supporter of it, and I’m thrilled to have her here!

So, new book! I know with Our Own Private Universe, you were aiming for something like a queer-girl version of Judy Blume’s Forever, and you know I think you succeeded there! What was particularly important to you to include in the book, and why? 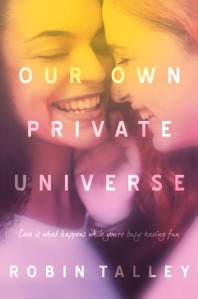 Thank you! With Our Own Private Universe, I set out to write the book I wished I’d had when I was a teenager and was first starting to figure out I was queer (which took me quite a while). What I wanted then, but wouldn’t have even known to look for, was a story that validated happy endings for queer girls. I wanted someone to tell me that however I wound up identifying, my life would go on, and it would be fun and interesting and with the usual ups and downs, just like it was for my straight friends. At that time, I was also desperate for representations of what it was like to be a girl in a relationship with another girl, complete with flirting and fighting and sex and everything in between. So I set out to cover all that in OOPU.

You’ve had some damn cool experiences in the publishing world, including hitting the NYT bestseller list and getting shortlisted for the Carnegie. What’s been the absolute coolest thing, and how do you usually celebrate?

I was pretty excited about the Carnegie situation. I got to go to London for that, which was awesome. Plus my UK publisher sent me a bottle of fancy champagne as a congratulations gift, which was lovely of them. My wife and I are not very good at finishing bottles of champagne by ourselves so we had some friends over and we made tacos and drank champagne. That might have been my favorite writerly celebration. 🙂

It will probably not shock you to learn that I’m a major fangirl of As I Descended. Have you considered queering up any other retellings, and if so, which ones? And whether or not you’re looking to write more, what kinds would you like to read? 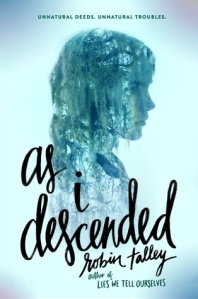 Thank you again! And I might have a queer contemp retelling of Taming of the Shrew coming up, actually. Stay tuned for more on that! There are a bunch of other classic stories I’ve tried to tackle but haven’t been able to make work. Doesn’t someone have an f/f Pride & Prejudice in the works right now? That would probably be my #1 request.

Right now what I’m most excited about are stories that focus on straight-up friendships between queer characters, like You Know Me Well by Nina LaCour and David Levithan. Those friendships can wind up being much more significant and lasting much longer than romantic relationships do, especially in the teen years. I’m glad we’re seeing that represented more in YA.

My all-time favorite has long been The Miseducation of Cameron Post by Emily Danforth. Other faves include When the Moon Was Ours by Anna-Marie McLemore, Ask the Passengers by AS King, The Summer Prince by Alaya Dawn Johnson, Tell Me Again How a Crush Should Feel by Sara Farizan, Far From You by Tess Sharpe, Ash by Malinda Lo, and The Five Stages of Andrew Brawley by Shaun David Hutchinson. And coming up I’m really, really, really excited for Ramona Blue by the amazing Julie Murphy.

I’m excited that we’re anthology buddies in All Out, the historical all-LGBTQ antho coming out in 2018. What setting did you pick for your story, and why?

I am SO EXCITED for All Out. I can’t believe I got to be in an anthology with all of these amazing authors!! My story is set in 1726 in Kensington Palace in London, and it focuses on a romance between two servant girls. I chose the Georgian period after finding lots of fascinating tidbits about this era in my research. Now I want to know what the setting of yours is, Dahlia!

Speaking of anthologies, you gave us an f/f story in The Tyranny of Petticoats; any chance you’ll be doing the same in Feral Youth?

My character in Feral Youth is definitely a girl who likes girls. And without giving too much away, readers interested in queer characters will find a LOT to like in this book.

And finally, what can you share with us about the awesome-sounding Pulp?

Pulp is my current work-in-progress, slated for 2018. It’s about lesbian pulp fiction, which were these incredible books were published in the 1950s and 1960s and sold very cheaply (think 25 cents) in drugstores and bus stations. They were intended for a male audience and often had lurid covers featuring scantily clad women, but a lot of the books were actually written by lesbians, and the best ones wound up being these really frank portrayals of lesbian life at a time when there were NO mainstream media images of queer people at all. So for a lot of readers, these books, with their lurid covers and all, were an essential lifeline—the only indication they had that there existed a community of other people like them. My own book, Pulp, has two different stories taking place in two timelines. One focuses on an 18-year-old girl in 1955 who’s just realizing she’s a lesbian and is writing a lesbian pulp romance, and the other follows a modern 17-year-old out-and-proud queer girl who comes across the other character’s book in the present day and tries to uncover the author, who wrote under a pseudonym and mysteriously disappeared from the public scene as soon as the book was published. 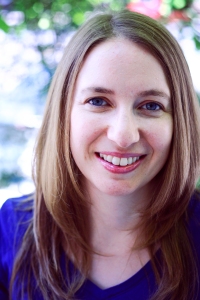 Robin Talley is the New York Times-bestselling author of four novels for teen readers: Our Own Private Universe, As I Descended, What We Left Behind, and Lies We Tell Ourselves. Her first book, Lies We Tell Ourselves, was the winner of the inaugural Amnesty CILIP Honour. Her work has been short-listed for the CILIP Carnegie Medal, the Lambda Literary Award, and the Concorde Book Award, and has been included on the American Library Association Rainbow List, the Amelia Bloomer Project List, and the Capitol Choices List. It has been nominated for the Kirkus Prize, the Young Adult Library Services Association Teens’ Top Ten, and the Goodreads Choice Awards, and has been selected for the Junior Library Guild. Robin was a Lambda Literary Foundation fellow, and has contributed short stories to the young adult anthologies A Tyranny of Petticoats: 15 Stories of Belles, Bank Robbers and Other Badass Girls, All Out, and Feral Youth.

Robin lives in Washington, D.C., with her wife, their daughter, and an antisocial cat. She enjoys reading about queer characters, analyzing Disney movies, and chocolate. You can find her at www.robintalley.com.