Webcomic recs, continued! This is the roundup I promised last time.

It can be hard to make it clear when a character’s supposed to be bi/pan. A lot of webcomics aren’t long enough or romance-focused enough to give the characters multiple love interests, and there’s not always an organic way to have people just announce their preferences — especially in fantasy universes where words like “bisexual” don’t exist. (To be fair, it wasn’t a word in our universe until the ’60s. And “pansexual” is even younger….)

Here’s a set of strips that do pull it off. For purposes of this list, it’s all in-text representation. If a character’s sexuality is specified by the author but has yet to be involved or even referenced in the strip, I’m leaving those for someone else to rec.

Meera is openly into women from the beginning; Carina eventually comes out to her as bi, in a scene with a realistic mix of sweetness and awkwardness. They spend a lot of the strip having mutual crushes that they’re too awkward to confess, but it feels natural and organic with the plot, rather than dragged-out for drama. It helps that they’re busy with the overarching plot (a case about a fashion designer’s work being stolen).

…And then eventually they do get together, and finish working the case as girlfriends, and it’s all-around great.

(2) Girls With Slingshots by Danielle Corsetto

A lot of the cast is straight, notably Hazel, but there are a couple of lesbians in their friend circle from the beginning — like Thea, who gets married over the course of the strip. And then there’s Jamie, who identifies as straight for the first few years of the strip. Especially after one instance of f/f experimentation, where they part as friends but it doesn’t rock her world.

Some time after that, she meets Erin. Things get romantic. And intimate. And…stop just short of sex, because Erin’s on her own little arc of self-discovery, with “asexual” somewhere at the end.

Jamie’s sexuality is complicated — she struggles with pinning down the nuances of exactly what she’s into, and hesitates over all the terms her friends suggest to sum it up. (Worth noting: the phrase “biromantic heterosexual” wasn’t in wide circulation at the time.) I don’t remember if she ever settles on a single label, just that she does get back to a place of comfort and self-understanding over the whole thing. And none of this derails the writing or characterization, or undermines the strip’s ability to deliver regular punchlines. 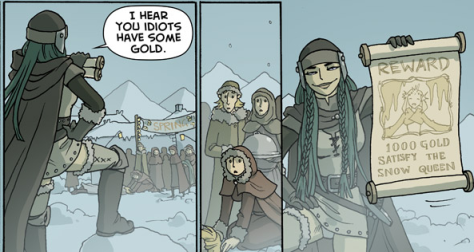 Sexy magical comedy, ongoing. Mostly-disconnected short arcs and strips, about a whole range of characters and situations. You can tell the authors have a generally healthy outlook about sex, even when the characters don’t. Sometimes pokes fun at fantasy tropes. Mostly NSFW. (To the point where, in the archives, the “safe” strips are the ones that are marked.)

The sample image here is from a short arc about the Snow Queen, who needs to have sex in order for winter to end, but every man who tries to satisfy her gets his relevant bits frozen off. At last, a female mercenary shows up with a strap-on. Which gives you some idea of the tone of the rest of the series.

To be clear, this isn’t an “all about sex, therefore everyone is bi” strip, it’s an “all about sex, and all sexualities are represented” strip. Obviously not for every reader! But if you like fun dumb sex jokes, this is the motherlode.

It’s a story about some kids who are friends over the internet. They decide to play a game together. There are major consequences.

Fantasy/gaming adventure, complete. Four human kids play a video game, which turns out to be an immersive-reality experience that destroys their universe, and they have to win the game in order to make a new one. They’re joined by a group of alien kids — the trolls — who played an earlier round of the game, the one that created our universe in the first placce.

It’s a huge, sprawling, ridiculously complex series. Includes animation, chatlogs, flashing images, and mini-games. If you’re just trying to get into webcomics, it might not be the easiest place to start. Or it might suck you in so hard that it ruins you for the rest of the genre. Could go either way, really.

Troll romance is…culturally complicated. (If you’ve picked up one thing about Homestuck by fandom osmosis, this is likely to be it.) The relevant point here is that they’re default-bi, which pays off in various relationships as the story goes on. There’s also at least one human whose romantic prospects include a male human and a female alien.

(If you look at both pre- and post-Scratch incarnations, at least. And this is the point where I hit the brakes on Trying To Explain Homestuck, because if I go any deeper into the backstory we’ll be here all day.)

The stated mission of Project “Skin Horse,” a federal Black Ops department located in the notoriously pointless Annex One complex, is to aid and asisst the U.S. population of nonhuman sapients. Any humans willing and able to work there may be presumed deeply weird.

Supernatural comedy, ongoing. A government support agency that focuses on robots, demons, talking animals, and various mad-science experiments. Tip, the team psychiatrist, is a hot crossdressing human. Unity is a multitalented multiracial zombie, and by “multiracial” I mean “stitched-together parts of humans from multiple races.” Sweetheart, the leader and administrator, is a talking dog. Their job isn’t easy, but by golly they work hard at it.

Tip has an uncanny ability to attract women — including, in one instance, a female alternate-dimension version of himself. He’s also had at least one fling with a guy, Artie, who was human-shaped at the time but is technically a sapient gerbil, and recently described himself as “straight-ish” (before going on to seduce a mixed-gender crowd). Sweetheart has had male love interests in the past, and more recently has gotten crushes on women. Including an ambiguous thing with Unity (or maybe it’s gone unambiguous? I don’t remember, it’s been a while), although Unity is generally mostly interested in brains.

The strip is a sequel to the completed Narbonic, about a mad scientist and her assistants. You don’t have to read it beforehand to follow anything, but if you like Skin Horse’s general ethos and sense of humor, or if you want Artie’s backstory, it’s worth adding to your list.

Erin Ptah likes cats, magical girls, time travel, crossdressing, and webcomics. She’s the artist behind But I’m A Cat Person (featuring bi librarian Bianca) and Leif & Thorn (where Leif is into strong handsome people of all genders). Say hi on Twitter at @ErinPtah.