thI’m so pleased to welcome Effie Calvin, author of The Queen of Ieflaria, to the site today to discuss wish fulfillment in queer lit! I know it’s a topic that garners lots of discussion, so once you’ve checked out her novel, check out the post below it! 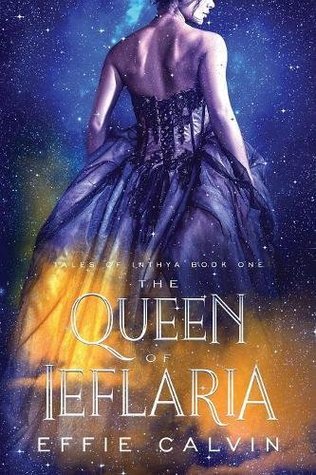 Princess Esofi of Rhodia and Crown Prince Albion of Ieflaria have been betrothed since they were children but have never met. At age seventeen, Esofi’s journey to Ieflaria is not for the wedding she always expected but instead to offer condolences on the death of her would-be husband.

But Ieflaria is desperately in need of help from Rhodia for their dragon problem, so Esofi is offered a new betrothal to Prince Albion’s younger sister, the new Crown Princess Adale. But Adale has no plans of taking the throne, leaving Esofi with more to battle than fire-breathing beasts.

I live for wish fulfillment. Specifically, I live for queer wish fulfillment. This isn’t a guilty pleasure thing, this is something I am honestly and openly passionate about. I think wish fulfillment is a positive thing that we should embrace! And I believe that there are so many unique possibilities for inclusive world-building in speculative fiction.

I love to see writers proudly inserting their own identities into stories where there’s often a kneejerk reaction of “but people like you don’t belong here!” Minorities of all kinds have been made to feel unwelcome in sci fi and fantasy. Ironically, these genres are the best places for authors to easily build worlds that reject bigotry at a fundamental level.

When I was a kid, I used books to escape into worlds better than the one around me. Adventure, prophesy, evil empires, magical beasts; all those things appealed to who I am. And yet, I was never fortunate enough to stumble upon one of those rare few where the main character wasn’t heterosexual. Sometimes I wonder what would have happened if I had. Maybe it wouldn’t have taken me until college to come out!

When I finally did begin to embrace my identity, I told myself that I needed to come to terms with the fact that people like me were never the heroes of the stories I loved. At best, they were quirky sidekicks probably destined for an early death. At worst they were monsters, Hays Code throwbacks that embodied every negative stereotype about queer people. But usually they just plain didn’t exist.

I knew I wanted to be an author, so I wrote a couple of books, always about heterosexual girls having adventures and getting the boy at the end. None of them sold. Exhausted and frustrated, I decided I was going to write something for me, something unashamedly gay. I remembered playing Skyrim, how I’d married Ysolda and adopted two girls and lived in a giant house and nobody cared. I knew there were games that opted not to implement homophobia in their fantasy worlds. Why not do the same in a book?

I’d only been reading traditionally published novels up until that point, so I didn’t know of any books that treated queer relationships as unremarkable. But I had read fantasy novels that didn’t have sexism, where women could own their own property or be warriors or mages or whatever. If worlds without sexism could exist, why not worlds without homophobia?

At the time, I’d only been reading traditionally published novels, so this was not a concept I’d ever encountered in the wild. Nevertheless, in February 2015, I began a story about a princess betrothed to another princess. I didn’t care if it didn’t make sense. I didn’t care if it was stupid. It was the story I wanted to tell. I wanted to see myself in a fairy tale setting.

And yet, as I began to design the world, I realized just how much of my preconceived notions of what “normalcy” was were influencing my writing. My concept wasn’t nonsensical. It was just…different. New. I was subverting every toxic trope I’d ever internalized about queer people and, by extension, about myself. It was freeing. I was letting myself exist without excuse or explanation, just as I do in the real world.

And that’s the wonderful thing about speculative fiction. We can design worlds where taboos against different sexualities or gender identities (or any other sort of identity) simply do not exist. And there’s countless ways to do it. Millions of worlds, millions of possibilities. We can be ourselves without suffering.

When creating a setting like this, one will inevitably come across readers whose suspension of disbelief stops short at the inclusion of minorities. Dragons, fairies, elves, space aliens, faster-than-light travel, sleeping off gut wounds = okay. Queer people or women or people of color living free of any traces of oppression? Now that’s a bridge too far.

The argument, in this case, tends to be that dragons, fairies, etc, belong in these genres, whereas queer people stick out as anachronistic. I’ve even seen this argued in non-earth settings. I’ve even seen it argued for my own work, which was designed specifically to be a queer utopia with no connection to our real world!

For the sake of argument, let’s say that queer people in fantasy settings is anachronistic. It’s not, but let’s just pretend that it is. The thing is, a lot of what we think of as ‘historical’ or staples of the genre is anachronistic. The reason that we fail to recognize the anachronisms is because we have grown up with them. Even if we know intellectually that Vikings never wore horned helmets, we don’t balk at the sight of them in fiction because we’re accustomed to them. In that vein, I see the objection to any kind of minorities in fiction as nothing more than an appeal to tradition. Just because we’ve always done it a certain way doesn’t mean we have to carry on like that.

Is bigotry a fundamental and inescapable aspect of humanity? There’s no real way to know for certain, but I’d like to think it’s not. And even if it is, I don’t think there’s anything wrong with occasionally wanting to slip into a world where that isn’t the case. In a time where the world seems bleaker than ever, I like my storytelling to be optimistic.

Stories where queer characters have to struggle to overcome bigotry are extremely important and valuable, and I definitely don’t think authors should stop writing them. But I’m so glad to see so many writers coming forward with queer genre fiction. These were the stories I needed when I was younger. By writing them, I hope I can make the world a better place for those who come after me.

Effie Calvin is a lesbian librarian from the Philadelphia area. Her favorite genres are science fiction and fantasy of all kinds. When she isn’t writing books, she can usually be found taking pictures of her extremely spoiled cat. Her debut novel was released in February 2018 from Nine Star Press, and the sequel was released in November 2018. Her third book, The Queen of Rhodia, has an expected publication date of May 2019.