Welcome to Better Know an Author, a feature title I stole from Colbert Report because I miss it so, which will introduce you to a fabulous author of LGBTQIAP+ books every month! This month, the spotlight is on Erica Cameron, who’s got a whole lot of books on the shelf and in the pipeline, adding some much-needed rainbow representation to the YA canon. Come say hi!

Which of your books have LGBTQIAP+ representation, and can you tell us a little about them?

All four of my series have at least some representation. Laguna includes the least, and my upcoming fantasy might arguably include the most—based both on the world and the individual characters.

In Dream War Saga, though there isn’t any rep in Sing Sweet Nightingale (the one thing I now regret about that book is how straight and white it is, no matter how true that demographic is to the setting), I introduce a lot of queer characters in the second book, Deadly Sweet Lies. Julian and Nadette—my two narrators—are asexual and lesbian respectively, and both of those are confirmed on page. There are other queer spectrum characters in the book, but only Nadette’s love interest has their orientation confirmed.

For the Assassins books, rep is all over the board and—over the course of both books—not confined to orientation. Asexual, bisexual, gay, panromantic demisexual, gender fluid, and intersex. Most of this is confirmed with labels on the page, but some is implied when we’re talking about the minor characters.

In the fantasy series coming in February, The Ryogan Chronicles, the story starts on the island of Shiara and focuses on a culture with a bisexual-as-normal outlook on orientations. I do also have asexual rep in the book as well as an established third gender. Also, as a point of interest, there isn’t a single white character in this series. At all.

Your next book is the first in a series all about assassins—what kind of hands-on research does that entail? 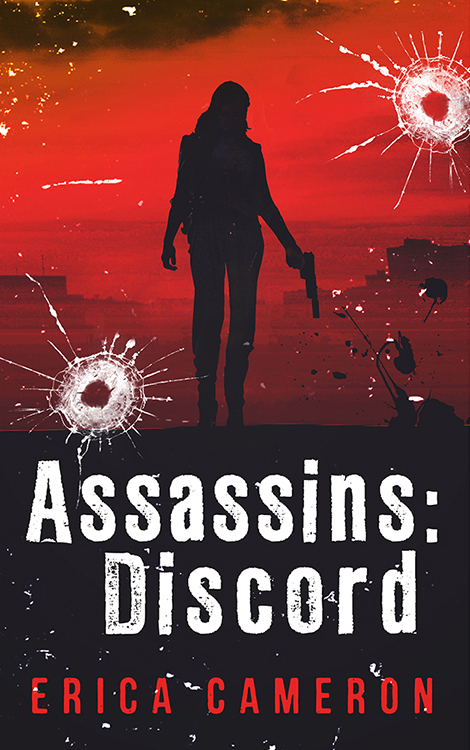 Far less than I wanted to! I did get the chance to go to the International Spy Museum in Washington, DC, and that was a lot of fun. It’s unfortunately one of the few museums in DC that isn’t free because it’s privately run, but it has some great interactive features. Like a vent you can actually crawl through! I had hoped to be able to take lessons at a gun range with various weapons (I’d probably be very bad at it, but I still wanted to have the experience), but time and money got in my way. Aside from that, though, a ton of research went into this book, none of it concentrated on any one thing. Hacking, security systems, weapons, spy technology, homemade bombs, the reality behind truth serum—basically, if there is such a thing as a government watch list based on search history alone, I’m on it because of this book.

What’s a particularly conscious choice you’ve made in your representation?

Well, more of it, definitely. I come from a place of privilege, and even though I’ve grown up in an area that forced me to be aware of that privilege in certain ways, I was still ignorant of many aspects of that same privilege when I wrote Sing Sweet Nightingale. Yes, the book is set in a very small town in northern New York that is based loosely on the town my father grew up in, and yes, that town is still to this day predominately white and straight and incredibly insulated from the reality of the world, but I didn’t have to recreate it so exactly. I could have made it a more realistic—more representative—version of the same place. With each book since then, as I learn more and more about respectful inclusion, the representation in the stories expands. Hopefully it will continue to do so.

That being said, incidental diversity is very different from a story about some aspect of the diverse experience. I will do my best to include as many non-white, non-straight, non-cisgender characters as possible—with a somewhat selfish focus on making sure every one of my series includes an asexual-spectrum character—but I will likely never ever tell a story about what it is like to be non-white, non-straight, or non-cisgender. Even if I were to attempt writing a book about what it’s like to be a white, cisgender female, heteromantic asexual, I’d still be nervous. And that’s writing exactly from my experience. I don’t have the gall to try telling someone else’s story. Not in that way.

You’re an ardent advocate for asexual representation in media, and a frequent user of the #DontErasetheAces hashtag. What are some things allosexual people, especially authors, can keep in mind in order not to contribute to ace erasure?

That, just like in the bisexual community, erasure happens. All of the time. The recent uproar over American Apparel’s pride month tote bag is just the most recent example, but it’s a perfect one. And it’s ridiculous that even a full year after GLAAD publicly stated that A is for Asexual, Agender, & Aromantic, we’re still having the same argument.

Erasure is also one of the reasons I prefer MOGAI—marginalized orientations, gender alignments, and intersex—instead of LGBTQIAP+. First, it’s easier to say, but more importantly, it never changes. Letters, and therefore people, don’t get dropped. With an acronym as long as LGBTQIAP+, the end almost always disappears. A lot of people who aren’t deeply involved in the community have a hard time remembering any of the letters past Q, and have an even harder time remembering what those extra letters stand for. The belief that A is for ally is still pretty pervasive. It’s also one of the few letters that stands in for multiple sections of the community—asexual, aromantic, and agender—so even when the A is included in LGBTQIAP+, people don’t always agree on who is being represented.

What can authors do? Incorporate characters who fall on the asexual spectrum, even if they’re secondary characters. Give them full lives and interests outside of sexual relationships and give us the word in black and white. Make readers go look it up if they don’t know what it is, but don’t give them any wiggle room on interpretation. Don’t leave it implied. Find a way to work the word into the text, whether it’s demisexual, graysexual, asexual, or any other orientation under the ace umbrella. The solidity of that kind of representation is so important right now. Awareness is key to changing the way asexuality is viewed by the world.

What’s something you still dream of contributing to YA lit? (Can be as general or as specific as you like!)

At least one book that lives a lot longer than I do. It’s literally impossible for me to know if this will happen, but I sincerely hope that it does.

What’s the first ace representation you saw in any medium that really stuck with you, for better or for worse?

I wish I could remember the name of the book…so I could warn people away from it. Unfortunately, since I returned it right away, and I didn’t write the title down anywhere, I don’t have it. This story, while otherwise interesting, had a main character (we’ll call him Bill) who told the second (let’s call him Ted) that he was asexual. It was the first time I remembered ever seen a character say that in a book, and definitely the first time since I had discovered the orientation for myself. The noise I made upon seeing that in print was basically inhuman. But then the story continued. It was clear very quickly that Bill was not asexual. Bill was afraid of intimacy for various (very real) reasons, a virgin, and mistrustful of Ted. Due to all of those factors, Bill basically lied to Ted about being asexual. He used it as a stalling technique to give himself time to think.

It was the first representation of my orientation I saw, and it was used as a trick to keep someone else at bay. It was a lie. Bill was “fixed” with sex. It was awful.

It also strengthened my resolve to include as many different aces as I could in my own books.

The way the community rallies. Whether it’s to promote a new story that is exceptional or to protect an author being harassed or to call out discrimination or awful representation when it’s presented as “good enough,” this community—especially in YA—is a beast. In the best way. It’s the dragon in a fantasy story that will curl up with the human who raised it and smilingly burn a would-be assailant to a stick of over-charred meat. I love the support I’ve seen and that I’ve gotten from this community, and I’m so happy to continue contributing to it.

The first I ever remember reading was in Tamora Pierce’s Circle of Magic series. I was thrilled because Daja—who already reminded me of my best friend at the time—became even more of an accurate representation for my friend after she started crushing on girls. Sadly, it took a long time after that before I found any sort of representation that wasn’t a snarky, fashion-conscious Gay Best Friend character.

Recent years have made me so happy. I fell in love with books like Martyr by Alex Kahler (which is being relaunched in brilliant new form soon!) and None of the Above by I.W. Gregorio. I get to be champions of books like 27 Hours by Tristina Wright and bounce in anticipation of books like Timekeeper by Tara Sim, Marion by Ella Lyons, and Of Fire and Stars by Audrey Coulthurst. This is a very exciting time to be part of the YA community and I can’t wait to see what the next few years will look like!

Where can people find more of your work on asexuality?

The first time I really wrote in detail about my asexuality was on DiversifYA in a great interview I did after meeting Marieke Nijkamp at RT 2015, but the piece I am pointing everyone to right now is the essay I recently wrote. Don’t Erase the Aces is a very personal story about my late discovery of asexuality and what not having access to that label meant in my life. On my site there is also an Asexuality Awareness page with useful links to both things I have written and outside sites with valid and valuable information. I am hoping to do a lot more in the future (I’ve applied for a TED Talk, so here’s hoping that happens). Honestly, I will likely spend the rest of my life talking about this, and I’m very okay with that.