Today on the site, I’m thrilled to have a guest post from Alexander C. Eberhart, a debut novelist whose gay YA, There Goes Sunday School, releases from 7 Sisters Publishing on June 4th. This is a post about how a single book bolstered him to write the books he wanted to see in the world, and what better topic is there for a queer lit blog than one on the power of existing queer lit? (And what better day to post it than on the release date of Leah on the Offbeat, the companion novel to Simon??)

Before we get to the post, here’s the deal with There Goes Sunday School: 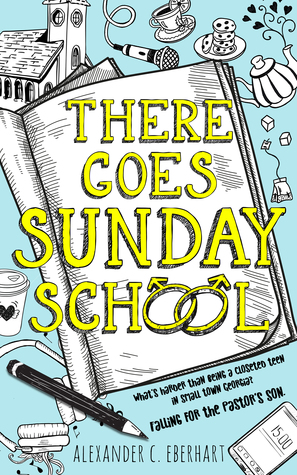 In sixteen-year-old Mike Hernandez’s life, only one thing is clear: Gay is NOT okay. His family’s life revolves around the church, a church run by the vocally intolerant Pastor Myers, so Mike has resolved to spend his life in the closet. His only escape—besides the occasional, anonymous gay make-out session—is his art. He pours his complicated emotions into risqué drawings he keeps in a secret sketchbook. A sketchbook he carries everywhere.

When his sketchbook goes missing in the middle of Sunday school, Mike is sure his life is over. He’s going to be outed, ostracized by their community, condemned by the pastor, maybe even homeless. What’s worse, the pastor’s son, Chris, suddenly seems hell-bent on adopting Mike and his friends and he has no idea why.

When an awkward confrontation with Chris leads to an unexpected kiss instead of a much-expected punch, Mike’s world is turned upside down. As their friendship grows and faith is questioned, Mike may be forced to choose between the comfortable life he’s always lived and a chance at the love he never thought he deserved.

It’s 5:00am. I look at my phone a second time just to verify I’m reading it correctly. How did it get so late? What am I doing here, half twisted in bed sheets and flipping page after page of this YA book I ordered from Amazon. I started reading thirteen hours ago, and now I’m ravenous. I devour each chapter, desperate to reach the culmination of this work of teenage angst. One question sears itself into my mind—Who the hell is Blue?!

The book I was so voraciously enjoying was none other than Becky Albertalli’s Simon Vs. the Homo Sapiens Agenda, more popularly known now for it’s movie adaptation, Love, Simon. If you’ve had the immense pleasure to enjoy Becky’s masterpiece, whether on the screen or off the page, then I know you’ll empathize with me when I say that this story changed how I viewed YA books. Not only that, it was everything I had been searching for in fiction since I was an awkward, Harry Potter fan-fic reading, pimple-ridden thirteen-year-old. Finally, a love story for people just like me!

While reading Simon’s tale of Oreos and secret emails, a question occurred. Why aren’t there more books like Simon on the shelves?

When the last page fell, and the early morning sun had started peeking through my curtains, this newly developed question buried itself deeper into my subconscious. You see, at this point in my life, I’d more or less hit a rock bottom. I was in between jobs, my passion for writing had shriveled over the summer as weak plots collapsed under the weight of my own insecurities. I was desperate for a sense of direction. Little did I know, my mind was only collecting these scraps of discarded stories, storing them like kindling until the spark of inspiration could ignite them into a blaze.

It was 6:00am when I grabbed my laptop and started sifting through the rush of ideas rising from the inferno my mind had become. By midmorning, I had mapped out the plot for three new projects, all centering around protagonists that I wish I could have known ten years prior.

One of those projects grew to become There Goes Sunday School, my debut novel, in which I poured everything that I needed to hear as a gay teen growing up in the south. This story became so special to me, that I almost didn’t submit it to be published, fearing it would lose its power if it were watered down. Fortunately, I was not the only person itching to tell these stories, and I found a publisher that not only supported me as an author, but whose mission is to bring diverse stories to light.

Now, I get the privilege to fill the shelves with all the stories I wished for growing up. Now, I strive to create characters that show young adults that they can be proud of who they are. Now, I’m ready to keep progressing the world of YA.

And it all started with a little red book and really late night that changed my life forever.

ALEXANDER grew up in the Metro Atlanta Area his entire
life, moving from suburb to suburb, just on the outskirts of the city. He’s always had a passion for writing, even from a young age. He still lives on the cusp of Atlanta, inching his way ever closer to finally becoming the City Dweller he’s always wanted to be.

In the meantime, he spends his days writing stories with queer characters and drinking an unfathomable amount of coffee. When he isn’t crafting quality queer fiction, you can find Alexander most likely curled up alongside his boyfriend, watching a movie or another equally lazy task.