Today on the site I’m delighted to welcome author AJ Fitzwater, author of the very queer fantasy short story collection The Voyages of Cinrak The Dapper, which releases today from Queen of Swords Press! Here’s a little more on the book:

Cinrak the Dapper is a keeper of secrets, a righter of wrongs, the saltiest capybara on the sea and a rider of both falling stars and a great glass whale. Join her, her beloveds, the rat Queen Orvilia and the marmot diva Loquolchi, lead soprano of the Theatre Rat-oyal, her loyal cabin kit, Benj the chinchilla, and Agnes, last of the great krakens, as they hunt for treasures of all kinds and find adventures beyond their wildest dreams. Let Sir Julius Vogel Award-winning storyteller A.J. Fitzwater take you on a glorious journey about finding yourself, discovering true love and exploring the greatest secrets of the deep. Also, dapperness.

And here’s AJ to talk about queer speculative fiction of Aotearoa New Zealand!

Aotearoa New Zealand may be a small country (current population approx. 4.5 million), but our literary history is unique and strong.

The queer speculative of Aotearoa New Zealand is a niche within a niche. Where it’s come from and where it’s heading (like all star gazers, we have multiple understandings of our past and future) is a cloak woven with the threads of colonialism, indigeneity, race, and marginalization.

Aotearoa New Zealand’s colonial history carries many parallels to other lands claimed by the British Empire. We inherited their hetero-patriarchal religions, laws, and social sensibilities. Like many countries, our queer people were paraded in front of the courts and people as freaks, deviants, and society destroyers. Our history survived in the underground and in enclaves, through activism, oral storytelling and perseverance.

Our queer heroes include Carmen Rupe, a drag artist, activist, sex worker, and club owner who ran a safe space coffee lounge in Wellington back in the 60s and 70s; Georgina Beyer, the first transgender mayor in the world; Richard O’Brien, Rocky Horror creator; and Marilyn Waring, MP, activist, and economist. Since the turn of the century, we’ve had a great crop of MPs working hard on Rainbow Politics, like Louisa Wall, Jan Logie, Chris Carter, Tim Barnett, and Chris Finlayson. Our historic watersheds are the decriminalization of homosexuality in 1986 (a campaign that began back in the 60s) in the midst of the AIDS crisis, the first Hero Parade in 1991, and the passing of Marriage Equality in 2013. Our current legal battles include trans rights in multiple sectors, like inclusive language, employment, health care (standard, gender affirmative, and mental health), prison reform, and gender changes on official documents.

With the weight of history, the rich living cultures of Māori, Pasifika, and multiple cultures and ethnicities, a secular society, a sea-locked geography that often gives us a cut-off dystopian feel, and walking arm-in-arm with those who paved the way, we can begin to understand what’s different about our literature.

Many early century queer authors wrote in the closet, like Frank Sargeson, and we’re still coming to grips with the lost history of suppressed voices. Voices who led the charge into the 21st century include Witi Ihimaera, Renée, and Ngahuia Te Awekotuku, often working across multiple disciplines.

So now I’ve given you a little bit of our queer history and landscape, I can talk about who is creating our speculative narratives, the people picking up the threads, reweaving, and sharing a new spread of stories, sensibilities, and hope.

Academic, activist and historian Ngahuia Te Awekotuku has spent more than 50 years immersed in multiple strands of Māori culture and queer rights. Two of her sectors of interest were researching and revising pre-colonial Māori stories of women’s power and sexuality and gender. This produced the great collection Ruahine: Mythic Women (2003, Huia Publishers).

Everyone is gushing about Tamsyn Muir’s lesbian necromancer epic Gideon the Ninth (Tor, 2019), and quite rightly so. Like many local creatives who work on the big publishing stage, she works from an overseas base, but still claims Aotearoa New Zealand as a home.

Working in the YA sector, Karen Healey is the award winning author of Guardian of the Dead (2010, Allen and Unwin), The Shattering (2011, Allen and Unwin), When We Wake (2013, Allen and Unwin) and While We Run (2014, Allen and Unwin), and as a teacher in Christchurch tends to the hearts and souls of the next generation of authors. There’s also up-and-coming poet and YA author Alexander Te Pohe, who created Ruru Reads,  a site for publishing work from PoC and Indigenous people; a great site in it’s time, Alec has now moved on to fully focus on their writing career.

What does Aotearoa New Zealand’s urban fantasy taste like? Check out Rem Wigmore’s The Wind City (2013, Steam Press), which, as it’s title suggests, brings to life all that makes Wellington interesting. Jamie Sands has a flair for romantic fantasy, including The Suburban Book of the Dead (2018, self published), and the Fairyland Romances series (Self Published).

Writing aromantic Chinese fairy tales is Michelle Kan, including Come Drink With Me (2019), Gold and Jasper (2019), and East Flows the River (2020, Fish and Swallow). Under her Fish and Swallow Productions company, she also creates independent film, documentary, and online content.

Author of The Dawnhounds (2019, Little Hook Press), Sascha Stronach describes the book as “beserk, witchy, LBGTQ+ mycopunk”. If you like weird and cool and gritty, this is the book for you.

Writing across disciplines is Darusha Wehm. A well travelled creative, Darusha does everything from short stories to games to podcasts to interactive fiction to novellas and novels. They’re just as eclectic in their genres, including cyberpunk, future detective, and political sci-fi. Check out Children of Arkadia (2015, Bundoran Press),   The Voyage of the White Cloud (2018, in potentia press), and the Andersson Dexter series.

In short fiction, you’ll find author and editor Andi C. Buchanan. Their novella From a Shadow Grave (2019, Paper Road Press) is a ghost story set in Wellington taking an innovative approach to split narratives; their short stories can be found in a variety of venues, including Fireside Magazine, Apex Magazine, and GlitterShip; and they are also the editor of the speculative magazine Capricious.

And there’s me. There’s my short collection The Voyage of Cinrak the Dapper (2020, Queen of Swords Press) about a lesbian capybara pirate and her found family, and my novella No Man’s Land (June 2020, Paper Road Press) about shape shifting land girls in WW2. I’ve also been published in magazines such as Clarkesworld, Beneath Ceaseless Skies, Fireside Fiction, and Shimmer.

This is just a taster of Aotearoa New Zealand’s speculative creative output. Once you look into one, you fall down the rabbit hole of many. 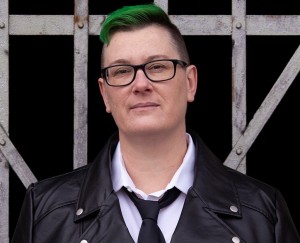 AJ Fitzwater lives between the cracks of Christchurch, New Zealand. Their work focuses on feminist and queer themes, and has appeared in venues of repute such as Clarkesworld, Beneath Ceaseless Skies, Shimmer, Giganotosaurus, GlitterShip, and in various anthologies. They are the author of rodent pirate escapades in The Voyages of Cinrak the Dapper, and the WW2 land girls shape-shifter novella No Man’s Land. With a background in radio, AJ lends their voice to podcast narrations, including for the Escape Artists universe. They enjoy maintaining a collection of bow ties. A unicorn disguised in a snappy blazer, they tweet @AJFitzwater