I am so psyched today to bring you this guest post by asexuality authors and advocates Claudie Arseneault and Lynn O’Connacht, bringing some stellar recs for ace SFF. They’ve got plenty of wisdom on the subject between the two of them, so I’m just gonna tiptoe off and let them take it away! (But not before reminding you that you can obviously also find great ace stories by supporting these two authors; links to their websites are in their bios at the end of the post!)

Asexual indie and short story writers have been producing a wealth of stories involving ace spectrum characters for years now, and it’s always a pleasure to share their work. These are talented folks who tend to go unnoticed, but their stories are varied and gut-wrenching. We can only hope that the light shined on asexual representation by Every Heart a Doorway will reach other deserving authors.

As ace spectrum readers and indie author the idea that there are only a handful of books that include characters on the asexual spectrum out there hurts so much. True, there aren’t anywhere near as many as we would like, but there’s so much more out there than these discussions suggest. We’ve selected just five stories that we feel are similar to Every Heart a Doorway not just because they feature ace-spec characters, but also because we feel that the story has some overlap with narrative elements in McGuire’s novella. All of the authors on this list are ownvoices and somewhere on the asexual spectrum. We hope you’ll enjoy the books!

Nkásht íí by Darcie Little Badger is a short story rather than a novel or a novella, but if you’re looking for something that captures that sense of eeriness and creepiness that’s at the core of Every Heart a Doorway‘s mystery plot, you’ll love this. The story follows two Lipan Apache friends as they try to unravel the mystery behind a car crash, and the family a man lost in it. Josie, the narrator, is aromantic and asexual. If you wanted a more in-depth look at a ‘death world’ like Nancy visited, Nkásht íí also has you covered. It’s deliciously scary and invites rereading to gather more of what’s happening in the text.

The Traitor’s Tunnel by C.M. Spivey may seem like a strange book to recommend to readers of Every Heart a Doorway, as its heart is more caper-heist than gruesome mystery, but readers will find that the mystery Theo gets drawn into by his sister has some very dark undertones. Together, he and Bridget will have to discover who is the traitor who’s been abducting orphan children from the streets and why. Readers looking for a panromantic asexual lead in an established and adorable relationship will love the representation in this book. (Blogger’s Note: You can read an excerpt of The Traitor’s Tunnel here!) 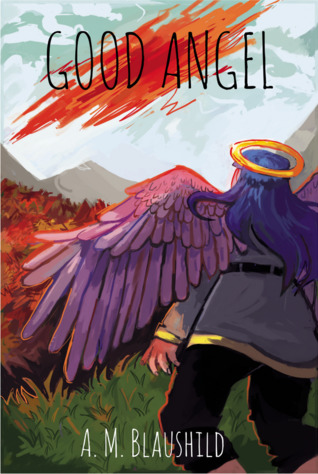 Good Angel by A.M. Blaushild is a great pick if you were disappointed by the way Every Heart a Doorway stopped following Nancy’s attempts to adapt to life in our realm and make friends at school. In Good Angel, Iofiel is a newly created angel who goes off to university to become a guardian angel, but after deciding to help an imp with his studies, she finds herself unsure of her place in the world. Good Angel is the first novel in a humorous duology, and features a curious angel who isn’t quite sure where she fits onto the spectrums of asexuality and aromanticism. It features classes, studying and making friends with people who the environment of the school finds… a little less than ideal.

Stake Sauce by RoAnna Sylver is an urban fantasy webserial/novel and will appeal to readers of McGuire’s work in general. Like, Every Heart a Doorway it’s got several unexpected twists (which we won’t spoil, of course!). Jude is a demiromantic asexual former firefighter with PTSD, and no one believes him when he insists there are vampires about until he meets Pixie, an adorable punk vampire who needs help with bigger, meaner vampires. In turns weird, dark, and delightfully hopeful, Stake Sauce contains one secret ingredient… love. No, really!

The Stake Sauce webserial runs on Patreon and the full story will be released as an ebook on October 31, 2017.

Fourth World by Lyssa Chiavari is a YA science fiction novel with two protagonists on the asexual spectrum. Nadin is asexual and sex-repulsed and Isaak is demisexual. We recommend this one for its at-times punch-in-the-gut representation of asexuality, and because much like Every Heart a Doorway it features teens trying to solve a mystery (a Mars archeology one!) and two distinct worlds, so if you enjoyed the idea of portal fantasy set forth this explores such a narrative in more depth. Nadin and Isaak are worlds and years apart, but when Isaak finds an ancient coin, they’ll have to work together to save both their planets.

And there you have it. Five stories that feature asexual characters just as prominently as Every Heart a Doorway does and that also have narrative overlap for you to enjoy. These aren’t all the asexual stories out there by a long shot. If you’d like a larger range of options or more detailed information on the representation in the stories we mentioned, check out Claudie’s database of asexual and aromantic characters in SFF. If you’d like non-SFF recommendations (or recs for games and tv/film as well) as well, there’s also Fuck Yeah Asexual’s database here. Happy reading!

Claudie Arseneault is an asexual and aromantic-spectrum writer hailing from the very-French Québec City. Her stories focus on non-romantic relationships and often feature large queer casts. The latest, City of Strife, is the first of a political fantasy trilogy released in February. Find out more on her website!

Lynn O’Connacht has an MA in English literature and creative writing, but wouldn’t call herself an authority on either. She currently resides on the European continent and her idiom and spelling are, despite her best efforts, geographically confused, poor things. Her latest book is a companion collection to her asexual retelling of The Little Mermaid, Sea Foam and Silence. Find out more on her website!