Today on the site, Erin Ptah’s webcomics recs continue! If you missed her recs on webcomics with major non-binary characters, you can find them here. For magical lesbians, read on!

Another webcomic reclist! At first I was just going to do Comics About Women In Love, then the list got way longer than 5, and had to be narrowed down somehow. (And that’s just comics where they’re explicitly in-text wlw, after weeding out all the cases of “don’t know if this is going to the yuri place, but I’m shipping it really hard.”)

All of our heroines in this subset have some kind of supernatural powers. All of them want to get the girl. Some of them even pull it off.

(Some explicitly identify as gay/lesbian on-panel, and with some I’m just extrapolating from the way they’re only ever shown being into women. Bi characters will get their due on a future reclist — stay tuned.) 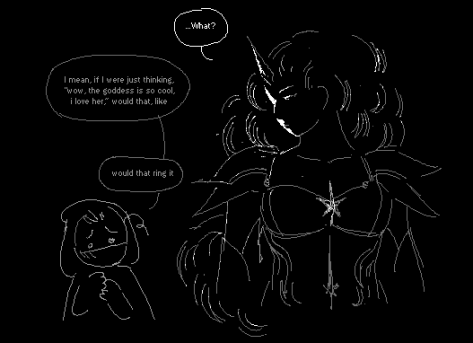 A comic about an acolyte in love with the goddess she serves.

Sci-fi romantic drama, complete. People living throughout the Distant Stars revere the Radiant Goddess, who brought peace to the galaxy. An enthusiastic but easily-flustered acolyte accidentally causes her to manifest. (She recognizes this particular Acolyte as the one who sacrifices cute decorated pancakes at her altar.)

Their fluffy temple domesticity is interrupted by an ancient evil. It’s out to dethrone the Radiant Goddess, and mind-control her worshippers into serving it instead. You can see how this sets up the Acolyte to save the galaxy with the power of love.

A comic with a bunch of twists, none of which I predicted on the first run-through, although in retrospect they all make perfect sense. The style is minimalist — mostly pixel lineart figures on a field of black — and at first glance you wouldn’t think an artist can do much with it. Then you keep reading.

(2) Lovespells by Ryan and Sage

A comic featuring a super gay witch who falls in eventually-reciprocal love with a gay (and also asexual!) lady magic knight.

Fantasy romance, ongoing. Esther, the witch, has a lot of power but a fantasy health condition that keeps her from going on adventures. Maria, the knight, is a painfully earnest do-gooder who uses a lot of magic and wouldn’t mind a coach. Esther jumps to agree, mostly because she is thirsty as all get out, and Maria is too innocent to notice the ulterior motives.

The tone is upbeat and feel-good — the “about” page has a whole list of depressing themes that the authors assure us will not be involved — without being shallow or boring. Our heroines are charming, well-rounded, and downright fun to watch.

Your Favourite Pizza Witch is about pizza! young love! falling in love with beautiful lactose intolerant babes and trying to woo them!! cat familiars?? and so much more!

Fantasy comedy, complete. Roxy is a witch who mostly uses her magic for pizza delivery, and gets a major crush on a customer…who can’t eat cheese. Will the power of love overcome their differences??

Hank gets attacked by a werewolf. Ada saves her life. Hank then becomes a werewolf. Ada is a vampire. Hank discovers the underground society of vampires, werewolves and more. Ada sells weed for money, and is kind of a bounty hunter. Hank is a medical illustrator. Ada is complicated. Hank is attracted to Ada. Things get complicated.

Modern fantasy drama, ongoing. There’s a supernatural bureaucracy that handles new arrivals, and normally recently-turned werewolves get mentored by the wolf that bit them — but Hank was bitten by a murder-y creep, so her new sorta-friend Ada gets the job.

Slow-burn romance, on the back burner while they deal with conspiracies, kidnappings, and not always being around to feed Hank’s cat. There’s lovely attention to the practical details of surviving in the modern world as a horror-movie monster. (Bonus: sometimes this involves Ada being smuggled through broad daylight by turning into a bat and hiding in Hank’s cleavage.)

The strip has had some unexpected hiatuses, but it’s gotten back to regular updates. With any luck this means it’s not too much longer before we get a page where they kiss. 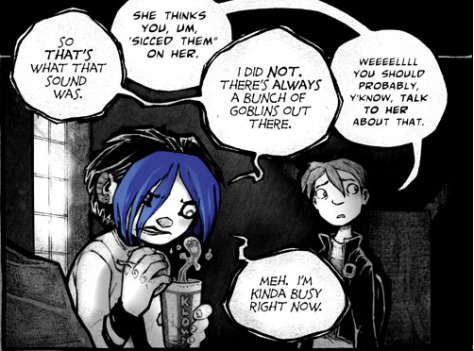 Goth fantasy, complete. Sera grows up in a beautifully-rendered town that has a whole gimmick about horror, which means it’s not too disruptive when her emotional issues spawn ectoplasmic ghouls that slink off into the woods. But a teenage meltdown prompts her to hole up in a mansion on the edge of town, where she mostly stays until our story begins.

She does have a couple of loyal friends, and end up getting a mentor, in the form of a much more put-together witch/popstar she’d been admiring from afar. They’re all supportive as she wrestles with various issues, including a much-delayed reckoning with her sexuality.

The magic and the alternate-universe worldbuilding are absolutely fascinating, and the comic would be worth reading on that count alone — but also, the basic portrayal of confused young lesbian angst is more relatable than a lot of “realistic” series that comes to mind. One of the few webcomics where I’ve gone and spent money to get the print version. 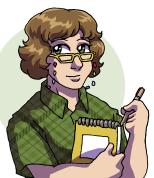 Erin Ptah likes cats, magical girls, time travel, crossdressing, and webcomics. She’s the artist behind But I’m A Cat Person (where lesbian Sparrow just learned to teleport) and Leif & Thorn (where lesbian Ivy can wipe the floor with water mages twice her age). Say hi on Twitter at @ErinPtah.