Big YA Release Day! Two of these are among my favorite reads of the year (that’s not shade re: the third; I just haven’t read it yet!) and I’m not online to enthuse about them allllll day because it’s Rosh Hashana, so I need other people to buy and read them immediately so we can gush about them for the rest of the week!

When the Moon Was Ours, by Anna-Marie McLemore

When the Moon Was Ours follows two characters through a story that has multicultural elements and magical realism, but also has central LGBT themes—a transgender boy, the best friend he’s falling in love with, and both of them deciding how they want to define themselves.

To everyone who knows them, best friends Miel and Sam are as strange as they are inseparable. Roses grow out of Miel’s wrist, and rumors say that she spilled out of a water tower when she was five. Sam is known for the moons he paints and hangs in the trees, and for how little anyone knows about his life before he and his mother moved to town.

But as odd as everyone considers Miel and Sam, even they stay away from the Bonner girls, four beautiful sisters rumored to be witches. Now they want the roses that grow from Miel’s skin, convinced that their scent can make anyone fall in love. And they’re willing to use every secret Miel has fought to protect to make sure she gives them up.

Flynn’s girlfriend has disappeared. How can he uncover her secrets without revealing his own?

Flynn’s girlfriend, January, is missing. The cops are asking questions he can’t answer, and her friends are telling stories that don’t add up. All eyes are on Flynn—as January’s boyfriend, he must know something.

Look Past, by Eric Devine 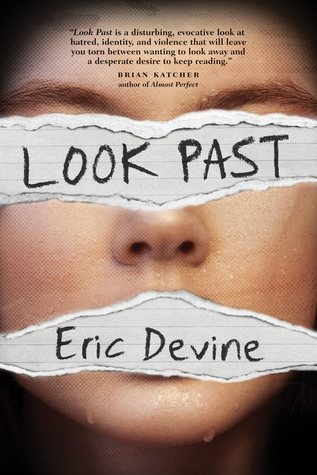 Someone brutally murdered Mary Mathison, daughter of a prominent and very conservative local pastor. Whoever it was is now taunting Avery, a transgender boy, with disturbing messages, claiming that Mary’s murder was revenge for her relationship with Avery. The killer’s demands are simple and horrific: Avery must repent for changing his gender identity, or he will be the next one killed.

Can Avery deny who he is to catch Mary’s killer? Or will sacrificing himself be the ultimate betrayal?