Today on the site we have an exclusive excerpt from When We Speak of Nothing, a newly released novel by Nigerian German author Olumide Popoola about being Black, male, and queer in London that commemorates 50 years since the partial decriminalization of homosexuality in the UK: 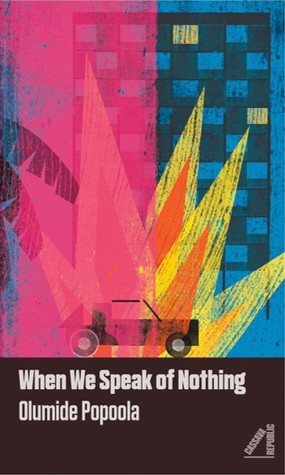 Best mates Karl and Abu are both 17 and live near Kings Cross. Its 2011 and racial tensions are set to explode across London. Abu is infatuated with gorgeous classmate Nalini but dares not speak to her. Meanwhile, Karl is the target of the local “wannabe” thugs just for being different.

When Karl finds out his father lives in Nigeria, he decides that Port Harcourt is the best place to escape the sound and fury of London, and connect with a Dad he’s never known. Rejected on arrival, Karl befriends Nakale, an activist who wants to expose the ecocide in the Niger Delta to the world, and falls headlong for his feisty cousin Janoma. Meanwhile, the murder of Mark Duggan triggers a full-scale riot in London. Abu finds himself in its midst, leading to a near-tragedy that forces Karl to race back home.

It was hard enough to stay level with this much newness. The sounds, the smells, the colourful outfits interspersed with sports and business wear. He felt lost. And scared. How to fit in here? How to even try?

But this part, immigration, produced even more dizziness. This was only sweat. Nothing else. No question mark, no slow trying to catch your feet. Just bare panic. He closed his eyes for a second. Breathe man, just breathe. He could hear Abu. The visa was approved, the Port Harcourt address verified. All he needed was for it to go quick. No overzealous immigration officer, aka gender police in the making.

Karl took out the mobile again.

heat man!!! no rain in site. @ passport control. Im here. Cant believ it. All gud so far. wish me luck

An officer in a beige uniform walked along the queue that was forming. What his role was supposed to be was a bit difficult to see. The foreigners from the plane were lining up with Karl. It was easy to spot the lot of them, either white or light-skinned, like Karl, almost as if they were carrying signs: really not from here. They were all older than Karl, mostly male, travelling by themselves with little luggage. Their faces were getting sweaty, like Karl’s, but theirs were changing to much deeper red tones. There was a general wiping going on, a couple of chequered handkerchiefs, back of the hand wipe – that sort of thing.

Uncle T had disappeared to the other end of the small hall.

Karl’s eyes followed the officer who stood next to a burly bloke with one large bag hanging over his shoulder. They were shaking hands and a few notes were slipped from one palm to the other. The officer caught Karl staring and Karl focused on his trainers instead. The burly man proceeded to the raised immigration booth and exchanged a few words with the officer behind the glass before leaving the queue and the airport altogether.

‘You have something for me?’ The man in beige appeared next to Karl.

The line was moving faster than he had thought. A lot of the white men in the queue had someone waiting for them, someone in uniform who would fast track them down the line, past the raised booth and out.

The officer looked at Karl. ‘What did you bring for me?’ ‘I’m sorry.’ Karl swivelled around. Where was Uncle T when you needed him?

The officer didn’t hide his pity and waved him forward. He had arrived at the raised booth and the man took his passport from his shaking hand and gave it to the man inside the booth. Another officer. He took the passport, looked at the picture, looked at Karl. Karl made himself scarce, pulled himself away from his skin, disappearing inside his bloodstream so that nothing on the outside could touch him. But the guy was still looking. Staring. No bloody subtleness at all, just full-on fixation. Curious and shit but unmoved, no smile, no softening, no invitation to exchange a few pleasantries. Nothing. Then waved to the supervisor behind him, who disengaged from the guy he was chatting with, in slow motion. Before he could make it to them, officer number three arrived, a guy who had been inside the building, further down, closer to the exit. Number three placed his folded arms on the rim of the small cubicle. He was about to tell officers number one and two, the one walking Karl over and the one in the box, something funny. You could see that because he was already smiling about it, like he knew this was a real good one. When he opened his mouth officer two shoved the passport in his face.

‘Ah ah, they no know how to dress demselves. Dis one, no be woman …’

‘My friend, leave am now. No be our problem.’

Karl smiled. That shy, I’m so damn unaware of my charm but I’m throwing everything your way smile. Because right now I need it to work, I need that charm to charm you out of asking me too many questions, out of extending this, making it obvious for everyone around. Embarrassing me. Hurting me. Making this unbearable.

That’s it. Someone had sense, he would be moving on in no time, just like most of the white dudes who had been in the queue before him. All he had to do was get some damn oxygen into his body so he wouldn’t collapse right here. Before he had officially made it to Nigeria. Breathing in, breathing out, one two, one two. Focus on pairs instead of the throng of officials shuffling around the little cubicle. Officer number two was flipping through the passport pages, thumb cinema-like. Officer one was casually looking at it and then at Karl again. Only Spain, otherwise no other country had ever seen this gathering of well-stitched pages.

Four of them now; officer number three still shrugging his shoulders, ready to move on, finally drop that story. Who cared about whatever it was; it was a long time until they were off; why make life harder by winding yourself up like that? And right at the start of their shift?

‘Wetin worry you? Leave am now. De family will tell am.’

Karl looked at Uncle T, who had walked through the Nigerian citizens’ line and was now far ahead. A questioning look. Karl quickly shaking his head, vigorously. Number four, the supervisor, followed his glance.

The officer looked back and forth between them.

‘But my father is waiting for me,’ Karl added, the word unfamiliar, almost sideways in his mouth. The puddle of sweat on his lower back was descending, trickling between his cheeks into his underwear. Father. Even more foreign than his first experience of the country. ‘He is outside.’

Number four’s face stopped doing what it was doing midway, the expression frozen. And like his face, time was now freezing over, sucking out all movement until everything became unreal, dangerously flat, a wall that would collapse and bury you in its debris.

Number three was looking around, trying to find someone else to chat with because this was defo no chatting whatsoever. Not what he had in mind when he had come over. Number two was still staring at Karl. At the long T-shirt that was hanging over his jeans. The trainers that were holding the jeans up, as it seemed. Number one? Had nowhere else to be, nothing else to do.

It was a bit much. The attention. The waiting. The not saying much. A whole group of people, yet again focus on Karl.

‘Your father is outside?’

Number four seemed to have recovered. Karl nodded, eyes sending nothing cute and charming any more just good old please. Pleading. But number four was already reaching inside the booth. Fumbled around. Then a quick stamp. Officer two shook his head. Supervisor handed the passport to Karl, ‘Welcome to Nigeria’, ignored everyone else and walked off.

But there was nothing else to be done. The group dispersed.

Karl was through and out the other side.

London-based Nigerian-German Olumide Popoola is a writer, speaker and performer. Her publications include essays, poetry, the novella This is not about Sadness (Unrast, 2010), the play Also by Mail (edition assemblage, 2013), the short collection Breach, which she co-authored with Annie Holmes (Peirene Press, 2016), as well as recordings in collaboration with musicians. In 2004 she won the May Ayim Award in the category Poetry, the first Black German Literary Award. Olumide has a PhD in Creative Writing and has lectured in creative writing at various universities. She is available for live studio interview.

One thought on “Exclusive Excerpt: When We Speak of Nothing by Olumide Popoola”