Today on the site, we have an exclusive excerpt from Claudie Arseneault’s upcoming fantasy, City of Betrayal, releasing on October 22nd! If you’re not already in the know, this is the second book in the series; if you like what you see but haven’t read the first, you can grab it here on sale for only $2.99!

Please note that the blurb contains spoilers for book 1, so if you’re new to the series, you can skip right on past to the excerpt! 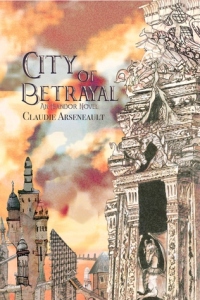 The whole city is searching for Hasryan.

Lord Allastam wants to take bloody, ruthless revenge for the murder of his wife. Inspector Sora Sharpe wants to bring him to justice for his crimes against the city. Yet no one knows where to find him except Lord Arathiel Brasten, who vanished 130 years ago only to magically return.

While the city’s eyes are turned to these two, no one is willing to help Lord Diel Dathirii free Isandor from the influence of the Myrian Enclave and their vengeful leader, Avenazar. High Priest Varden Daramond could help Diel, except Varden has been imprisoned. Lord Dathirii’s only hope of rescuing Varden is Arathiel. An alliance with him, however, would invoke the wrath of the Golden Table… and Lord Allastam himself.

With enemies gathering around him, Diel is left without allies in Isandor’s upper spheres and must place his fate in Lower City residents. But little does he know, the city he’s trying to save might well save him in return.

And now, the excerpt!

Diel’s happy humming always lightened Jaeger’s heart. It didn’t follow any known song, but simply filled their morning routine with joy, hovering in the air as they dressed. Listening to him, Jaeger could almost forget that their position in the city’s politics had worsened, not improved. But Arathiel had agreed to their dangerous plan and would soon join them, and Diel’s attempt to save Branwen’s friend would see the light, come what may.

This, however, did not completely explain why Diel seemed to float. Jaeger smiled and slipped behind his love as the other elf buttoned his doublet. He ran his fingers along the collar and folded it expertly, looking at the other through the mirror. A hundred thirty years ago, Diel had developed strong feelings for Arathiel, who had been House Brasten’s weapons master. Nothing had come out of it—Arathiel had barely noticed Diel, instead spending his time with Kellian—but it didn’t surprise Jaeger that this attraction had carried through decades.

Jaeger couldn’t resist this chance to tease. Diel’s crush on Arathiel had led to their first in-depth discussion of polyamory, and Jaeger knew the morning’s joy came from more than finally having a viable solution to their predicament. “I can’t remember the last time I made you sing like this.”

For a brief instant, Diel froze, then he threw his head back and laughed. “You’re not jealous. I know you better than that, and you know me better, too.”

“I do.” Jaeger ran his hand over Diel’s shoulder, leaning in closer. How often had Diel fallen in love with another through the decades? His heart shifted that way, expanding to greet the latest amazing person he’d met but never letting go of Jaeger. They had no secrets from one another, and when Diel wished for something more serious, he was the first to know. Jaeger often pushed him to act on it—faced with his love’s unaltered felicity, Jaeger could find no jealousy in himself. The occasional third angle to their relationship enriched his life, too. Even though Jaeger didn’t fall for most of them, he enjoyed the shifts in their dynamic and the special intimacy he often developed with them. Jaeger pulled the golden hair back a little to land a short kiss behind Diel’s ear. “I assume you’ll want to tell Branwen the good news.”

Diel examined himself once more in the glass, squaring his shoulders and taking a deep breath. The last few days had been hard on him, but the bags under his eyes had shrunk overnight. He glanced at the window, where the first sunlight filtered through white curtains. “It’s a bit early, but Aunt Camilla taught me all I need to know about strong teas. If you could go get Branwen? I’ll call someone to help me set the table.”

The request surprised Jaeger. Diel usually invited his niece and nephew himself while his steward readied everything. Could Diel manage the preparations? Jaeger bit his lip and withheld the question. An informal breakfast with Branwen didn’t require elaborate protocols, and while Diel might not know all the household servants by name, he didn’t need Jaeger to interact with them or get their help. Still, it bothered him that Diel had decided to reverse the roles, until he realized that at this hour, Branwen would be sound asleep and unwilling to wake.

“I see you are once again leaving me with the arduous task. Should I find armour? Alert Kellian we might have an incident on our hands?”

Diel pressed his lips together, trying his hardest not to laugh. After a playful shove to Jaeger’s shoulder, he schooled his expression and conjured some poor defence for his niece. “She’s not so terrible. Use the promise of good news as your shield and you’ll be fine.”

Jaeger grinned and saluted. “There are causes worth dying for,” he said before taking his leave.

Diel’s laugh followed him through the office and into the corridor, and Jaeger marvelled at how relaxed he was. He missed their brief banter—it vanished when Diel became anxious, and the Myrians spread his patience thin. Perhaps it was selfish of him, but the obvious impact this war had on Jaeger’s domestic life pushed him even more to stop Avenazar quickly and put an end to the stress and loss affecting the family. Jaeger wasn’t sure how they would see this through without the help of other Houses, but he trusted Diel to find a solution, even if it led them down less desirable pathways. 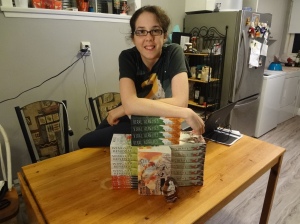 Claudie Arseneault is an asexual and aromantic-spectrum writer hailing from the very-French Quebec City. Her long studies in biochemistry and immunology often sneak back into her science-fiction, and her love for sprawling casts invariably turns her novels into multi-storylined wonders. The start of her most recent series, City of Strife, came out on February 22, 2017! Claudie is a founding member of The Kraken Collective and is well-known for her involvement in solarpunk, her database of aro and ace characters in speculative fiction, and her unending love of squids. Find out more on her website!