Published in 2010, Horner’s debut was one of the first f/f romances in modern YA, and I’m going to admit right now that that totally scared me off of reading it for years. Let’s just say, with some notable exceptions, early queer YA was…not excellent. But man, as soon as I read this I was really mad for cheating myself, because this is a book I would’ve been recommending for sure during all those in-between years. Road trip and theater elements plus a best friend/romance confusion element plus an enemies-to-lovers romance, all in an alternating timeline story? I MEAN. Anyway, don’t make the same mistake I did, especially now that it’s out of print! (But not hard to find used and discounted!) 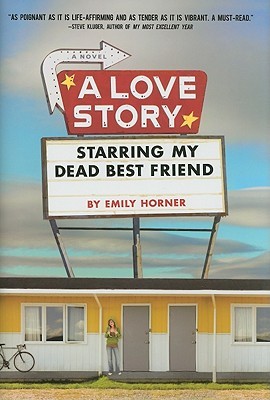 For months, Cass Meyer has heard her best friend Julia, a wannabe Broadway composer, whispering about a top-secret project. Then Julia is killed in a sudden car accident, and while Cass is still reeling from her death, Julia’s boyfriend and her other drama friends make it their mission to bring to fruition the nearly-completed secret project: a musical about an orphaned ninja princess entitled Totally Sweet Ninja Death Squad.

Cass isn’t one of the drama people. She doesn’t feel at home with Julia’s drama friends, and she doesn’t see a place for her in the play. Things only get worse when she finds out that Heather Galloway, the girl who made her miserable all through middle school, has been cast as the ninja princess.

Cass can’t take a summer of swallowing her pride and painting sets, so she decides to follow her original plan for a cross-country road trip with Julia. Even if she has a touring bicycle instead of a driver’s license, and even if Julia’s ashes are coming along in Tupperware.

Totally Sweet Ninja Death Squad is a story about friendship. About love. About traveling a thousand miles just to find yourself. About making peace with the past, and making sense of it. And it’s a story about the bloodiest high school musical one quiet suburb has ever seen.