Today on the site, please welcome Devin Harnois, author of Rainbow Islands! Is that not the most utterly delightfully queer book title you have heard? Oh, and behold the cover and blurb… 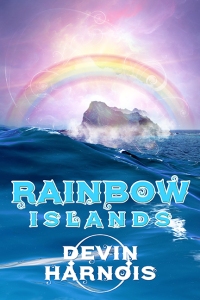 In the Christian Republic, homosexual people are given two choices—a camp to “fix” them, or exile to the distant islands populated by lesbians and gay men.

Sixteen-year-old Jason chooses exile and expects a hardscrabble life but instead finds a thriving, supportive community. While exploring his identity as a transgender boy he also discovers adventure: kraken attacks, naval battles, a flying island built by asexual people, and a daring escape involving glow-in-the-dark paint. He also has a desperate crush on Sky, a spirited buccaneer girl, but fear keeps him from expressing his feelings.

When Jason and his companions discover the Republicans are planning a war of extermination, they rally the people of the Rainbow Islands to fight back.

Shy, bookish Jason will have to find his inner courage or everything and everyone he loves will be lost forever.

*happy sigh* Here’s the link to get it: Amazon

After I began transition I sometimes felt a little guilty about not writing trans characters. There were so few trans stories, even fewer written by trans people. At the same time, I didn’t want to push myself into it just because I felt like I “should”.

The main characters in my novels are cis men, or a cis man and cis woman in my m/f romances. Growing up I always identified with cis male characters, because that was my fantasy: to be a cis man. When I was younger I didn’t have the words or even the understanding of what transgender was, I only knew a desperate desire to be a boy. I wrote a few poems and abandoned a handful of vague story starts that touched on my dysphoria and being trans, but otherwise I inhabited the fantasy, the escape, of being cis.

Then I saw a Tumblr post and the long string of replies that built an amazing story, a queer YA dystopian adventure with people fighting back against oppression. You can find it here: http://bequilles.tumblr.com/post/133505733119/lynati-lectorel-hazel-the-space-ace. And I thought—what if this story starred a trans boy? He’d get sent to the lesbian island, of course, because the oppressive government wouldn’t understand trans people.

That was how Rainbow Islands was born. For once I wanted to write trans male character. It finally felt right.

I wrote the first draft in November of 2016. Yes, during that election. The fear and anger lit a fire under me and through a haze of caffeine and anxiety, I somehow finished. Even under normal circumstances this wouldn’t have been easy to write. It touches on some dark stuff and some very personal stuff. Add to that our current political climate where trans people and other queer folk are being demonized. While writing some scenes I had to stop and walk away because they hit so close to home.

But Rainbow Islands also full of joy, about finding yourself, finding your people and holding onto that with everything you’ve got. It’s a story of queer triumph over oppression.

Jason, the main character, isn’t exactly me, but he’s sort of a love letter to my younger self. He’s the kind of character I desperately needed growing up and never saw. A boy like me, with a body like mine, and he gets to be the hero. He gets the hot pirate girl.

So many trans narratives are about the struggle and the misery. I wanted to show the other side of that, acceptance and happiness. Jason’s life isn’t perfect—he still deals with dysphoria and there’s a war looming, but he’s surrounded by people who support him. A whole society built by queer people, where being transgender, gay, lesbian, bisexual, asexual, or a myriad of other identities is just normal. It’s the opposite of the world Jason came from, where people tried to force him to be something he’s not.

My hope is that trans boys find this book and recognize themselves in it. That they see boys like them can be heroes too, not just victims or lessons for cis people. We deserve the kinds of stories that center us and lift us up, that show us a world where we get happy endings.

And a hot pirate girlfriend.

Devin Harnois writes YA and Romance of the fantastical sort. Somehow his books keep getting more queer. When he isn’t writing he spends too much time on Twitter and plays a lot of Dragon Age. Follow him on Twitter @devinharnois.