Pretty sure this month’s author needs no introduction to anyone who’s been reading queer lit in the past decade! I’m delighted to welcome Malinda Lo to the site as this month’s featured author, and to discuss her work past and present! Of course, she’s also familiar to many as one of YA’s biggest diversity advocates, and just published a new installment in her famous examination of LGBTQ publishing statistics (looking at 2015-16) that I encourage you to view if you haven’t yet. Now, let’s get to the books!

Let’s jump right to your new book, A Line in the Dark, which I think has probably pleasantly stunned a whole lot of your fans who might’ve thought they knew what to expect from a Malinda Lo book and now realize they have no clue. What about that story still really felt like You even though it’s outside of SFF?

Maybe the lesbians? 🙂 For me, crime fiction is my first love. I started devouring Nancy Drews when I was six years old and I’ve never looked back. This sounds evil, but murder mysteries are my go-to escape and relaxation reads. So even though I hadn’t written a mystery before A Line in the Dark, I knew how it was supposed to go from everything I’ve read over the years.

You’re definitely one of YA’s most prolific genre jumpers, debuting in fantasy and then moving on to sci-fi, then to a psychological thriller, and next up with historical! What genre(s) do you most see yourself continuing to write in, and why?

Lesbians. Is that a genre? Because I want to see queer women in every single genre there is.

It’s been a few years since your last YA novel, but some YA fans might not realize you’ve also been writing for Tremontaine. For those who aren’t familiar with the serial, what can you share about it and your role in it?

I actually only wrote for Season 1 of Tremontaine. It’s the prequel to Ellen Kushner’s Swordspoint novels, which are set in a very bisexual place that feels Dangerous Liaisons meets The Three Musketeers. I was a staff writer, working with a bunch of other wonderful writers, and we plotted out the whole season together and then wrote our episodes (we called them episodes but they’re basically novelettes) individually.

I think it’s pretty safe to say that you’re basically the godmother of queer YA SFF, which I imagine is wild considering you debuted less than a decade ago. What was it like to be The Only One for the stretch that you were? What did you recommend to readers who asked, “I read and loved all your books; now what?”

Wow, yes that is wild. I did not enjoy being the only one! I kept (and still keep) a list of books I’ve read and loved that are about queer women, and that list includes plenty of stuff beyond SFF or YA. In fact, you can see it here: https://www.malindalo.com/recommended-reads/

What would you recommend for your fans now that there are some more options out there?

Audrey Coulthurst’s Of Fire and Stars! I’m biased, but she was in my Lambda Emerging Writers Workshop in 2013 and that’s the book we workshopped. I love it and can’t wait for the follow-up, Inkmistress. Also, C. B. Lee’s Not Your Sidekick and its follow-up, Not Your Villain, which I haven’t read yet but have heard such great things about. C. B. Lee was in my 2017 Lambda workshop and I know she’s a kickass writer so I have no doubt her books also kick ass.

In addition to your novels and the serial, you’ve also got contributions coming up in a bunch of anthologies. What can you share about your stories in All Out and Lift Off? 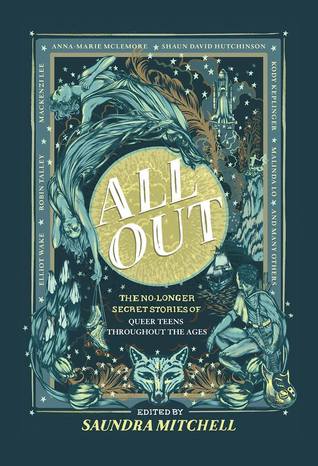 The short story in All Out was actually the basis for the novel I’m currently writing, which is a historical novel set in San Francisco’s Chinatown in the 1950s. The story is about the moment a girl sees a queer woman and recognizes her as queer — and begins to recognize her own queerness, too. The story for Lift Off is titled “Meet Cute” (and has no relation to the anthology of the same name) and is a light romance about two girls who meet at a comic con.

Of all the work you’ve had in other venues and volumes, what’s your favorite that you wish reached more of your fans?

Oh, good question! I have a very soft spot for my story “The Twelfth Girl,” which is a retelling of “The Twelve Dancing Princesses” in the anthology Grim (Harlequin Teen). I got an email from a reader recently who read it completely unsuspecting that the story was queer, and she was so excited to discover that I’ve written more things. So I think people are reading it, but maybe not my typical audience. I want my typical readers to know I wrote them another queer fairy tale. And it’s urban fantasy!

In additional to writing, you’ve also been a faculty member at the Lambda Literary Foundation. What’s the experience of working there like, and what should anyone aspiring to be a student there know about it?

It’s a really intense week because you’re spending it living in a dorm with dozens of queer writers. For many writers it might be the first time they’ve been in this kind of environment, so it can be overwhelming, but also very supportive. It’s so rewarding for me to give back to the queer community, and I love to work with queer writers. If you’re a queer writing thinking of applying, I suggest you polish up your best piece of writing and go for it. Don’t self-reject!

Your next book, Last Night at the Telegraph Club, is historical YA set in 1950s San Francisco, and releases in 2019. Anything you can tease us with about it until then?

Everybody can get a sneak peek at it when All Out is published in 2018!

With all the accomplishments you have under your belt, what at this moment is your proudest?

Surviving! So many writers from my debut year aren’t publishing anymore. This is a difficult industry, and I’m proud of myself for still being here and still writing. I hope people will enjoy my psychological thriller, and will stick around for all the genres I intend to write in.

Malinda Lo is the author of several young adult novels, including A Line in the Dark. Her novel Ash, a lesbian retelling of Cinderella, was a finalist for the William C. Morris YA Debut Award, the Andre Norton Award for YA Science Fiction and Fantasy, the Mythopoeic Fantasy Award, and was a Kirkus Best Book for Children and Teens. She has been a three-time finalist for the Lambda Literary Award.
Malinda’s nonfiction has been published by The New York Times Book Review, NPR, The Huffington Post, The Toast, The Horn Book, and AfterEllen. She lives in Massachusetts with her partner and their dog. Her website is http://www.malindalo.com.
Twitter: @malindalo
Facebook: facebook.com/malindalo
Tumblr: malindalo.tumblr.com
Instagram: @malindalo