I’m delighted to have Ellen Goodlett on the site today to celebrate the release of Rise, the sequel to YA Fantasy Rule! (Yes, one of the three sisters is queer and yes, there’s an f/f relationship!) Ellen did a badass trip around the world that was one of my favorite things ever to follow in the history of Instagram, and she’s here to talk about the process of writing over that year! But first, let’s check out Rise: 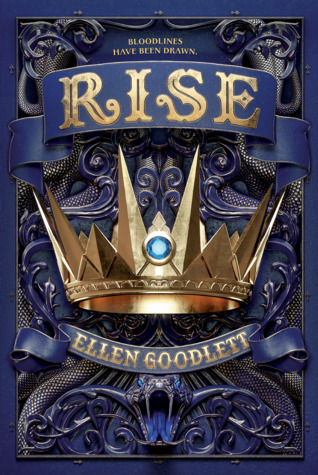 Sisters Akeylah, Ren, and Zofi are all a step closer to their dying father’s throne, a step closer to the crown that will allow one of them to rule over Kolonya. But the sisters’ pasts continue to haunt them. Each hides a secret marked with blood and betrayal, and now their blackmailer is holding nothing back. When King Andros discovers the sisters’ traitorous pasts, the consequences will shake the entire kingdom to its core.

As Kolonya’s greatest threat stalks closer and closer, weaving a web of fear and deceit around Ren, Zofi, and Akeylah, even the people they love are under suspicion. If the sisters are going to survive, they’ll have to learn to trust each other above all else and work together, not only to save themselves, but to protect everyone and everything they hold dear.

I travel for the same reason I read and write books: to escape my world, even if just for a little while, and explore someplace new. So it didn’t surprise my friends and family that at the start of 2017, when I realized I had enough freelance work to write full time, I decided to do it on the road.

I’d signed up for a program called Remote Year, a sort of travel agency-meets-networking organization for location-independent workers like me. Basically, for a monthly fee, Remote Year organizes apartments, office space, and travel to and from a different city each month for a year for you and a whole group of other “digital nomads.”

Before this trip, I thought I’d traveled a lot. But I’d never done it for this long, or with a group this big (Meraki, my travel group, started with 78 people in January 2017, and we ended with 56 in December of that year). I’d also never written full-time, either. I was used to having a 9-5 job and squeezing in writing where I could.

It was a crash course in time management, to say the least.

The first thing I learned was how reliant I had previously been on my work schedule to keep me on a routine. I used to write for 45 minutes on my commute each morning, sneak in an hour at lunch, write for another 45 on my commute home, and if I was on a deadline, keep writing in the evenings once I got there. One would think that with more free hours, I’d be even more productive, but instead I floundered. With nobody watching and no accountability, I’d sleep in later and later, lounging on Twitter for hours at a time or agreeing to go on daytime tours of the cities we were visiting rather than getting my work done.

It actually helped my transition to freelance life to be on the road with so many other “nomads.” Our group had journalists, web developers, video game creators, graphic designers, photographers, business owners, even a perfumer and an architect. Basically any job you can think of that could be done remotely (and some you wouldn’t imagine could be, like the guy who owns a landscaping company).

Nobody else was writing novels, but a decent number had office schedules to stick to, so I wound up copying my friends’ work hours. Admittedly, sometimes I still slept in later than I would’ve liked. But having a coworking space to go to every morning, and knowing there would be other people there, bent over their laptops in their own version of word sprints, motivated me to get my rear in gear.

Starting over fresh in a new city each month also gave me an opportunity to play around with different routines. You know the saying that you’re the average of the five people you spend the most time with? I’m starting to think the same is true of different cities, too. In Mexico City, where we started in January, I was a night owl—I worked late in the office, and stayed out even later socializing with my new group, on a frantic quest to try every restaurant we could before the month was up. In Lima, our fourth month, I found it unusually easy to wake up around dawn—something about the sea breeze coaxed me into feeling like a morning person for a change. In Córdoba (Argentina), I cooked for myself most days (also admittedly unusual), and in Kuala Lumpur I did my city-exploring during the daytime and worked part of the night shift with a few friends on strict US office hours (a struggle I didn’t envy in an Asian time zone).

To call the year a whirlwind would be an understatement. During our second month, while we were in Bogotá, I sold my debut novel, Rule. I spent the rest of the year—as we traveled throughout South America, Europe and Southeast Asia before finishing our trip in Kyoto—completing the book.

I also still had to do my freelance work, not to mention get to know the 78 other people in my group and explore each new country. (A month in a place sounds like plenty of time, until you get there and realize that a month barely gives you time to scratch the surface.)

Sometimes I hardly slept. Other times, like when we organized a writing retreat to Bali, I slept 12 hours a day, just grateful for the chance to relax.

Over the course of that year, though, I learned so much about myself. I learned what routines work for me (for example, I’ll never be a true morning person, but I do best waking up around 8am, tackling boring menial tasks first, and writing in the late morning/early afternoons). I learned that when I try to push myself too far, I’ll wind up doing an even worse job. I learned how to listen to my body—when it’s healthy, when it’s hurting, what it’s really craving (usually a giant pile of vegetables I’ve forgotten to feed it while buried headfirst in a deadline).

Since Remote Year, I’ve continued the nomadic lifestyle. I started the year in Bali, then visited Australia for a couple months, before I headed back to the US, hopscotching from LA to Denver to Pittsburgh to visit family and friends along the way, until I reached NYC in time for my book launch.

Coming back, too, has taught me something. For me, it’s easier to make freelance life work abroad.

Basic healthcare (when it’s not for anything super specialized) is more accessible and far more affordable in most other countries I’ve been to (even some the US would call “third world”). The nomadic lifestyle, which looks like a pipe dream on Instagram (never believe the Instas, by the way. Guarantee that for every gorgeous beach pic you see, there’s a trash pile cropped just out of sight), is actually more affordable than my previous life at a full-time salaried publishing job in NYC.

There are different concerns to take into consideration: for example, you don’t want to move into a gentrifying neighborhood, where US expats push locals out of their own backyards, nor do you want to move anywhere you’d become a burden on the local economy rather than a benefit to it. Some countries are safer than others, depending on your marginalizations (we spent a month in Belgrade, where LGBTQ people still face a lot of discrimination—although their new prime minister is an openly gay woman, a hopeful sign things might be changing). And in my writing, while I draw a lot of inspiration from the scenery and from friends I make along the way, I need to be careful not to veer out of my lane (you never want to appropriate another person’s culture, beliefs or traditions—learn about them and appreciate them, but don’t shoehorn them into your own work).

Moving around so frequently can take a toll. It can be easy to lose touch with people at home, or even just with everyday life. It can be isolating, especially when you aren’t traveling en masse in a big group. There are language barriers, new cultural rules and norms to learn everywhere you go.

But at the end of the day, what it boils down to for me is: I’ve met who I am on the road. And right now? She’s my favorite version of me.

ELLEN GOODLETT is a Pittsburgh native and former New Yorker. She wrote Rule while traveling the world with 78 other digital nomads, living in a different country every month. Rule was her debut novel.