Today on the site, I’m delighted to welcome Jake Martinez, whose debut YA, The Mixtape to My Life, releases today from Deep Hearts YA! Here’s a little more about the book: 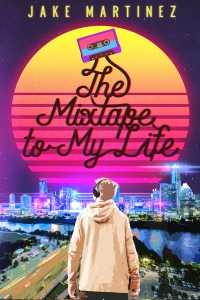 Justin Ortega might as well be starring in his very own coming-of-age 80s movie. If only he could find his dream boy to pull up in front of his house in a red convertible and sweep him off his feet, already! At seventeen years young, he isn’t quite Mexican enough for his South Texas town; isn’t manly enough for his father; can sometimes be too much of a smart mouth for his mother; and as for the other kids at school—let’s just say he’d be cast as the quiet nerd with a heart of gold…and an ear for music.

The one solace Justin has is his love of 80s hair metal bands, which he listens to on his beloved Sony Walkman. The songs, lyrics, and melody keep him just sane enough to escape the pressures of school and help navigate the hurdles life brings. Especially with the doozy this year is shaping up to be. Not only does he have to try out for a captain position which is rightfully his, but his best friend has found a new girlfriend, leaving Justin to fend for himself in a school where he’s mostly known as simply Coconut.

Enter Dominic Mendoza. Sweet, funny, and a blast from his past, the hunky football player has moved in next door. Justin could never forget how Dominic protected him in the eighth grade, nor the way Dominic made him feel, then…and now.

Except, this isn’t a movie. Confusion, friendship, and love won’t guarantee a happy ending unless Justin can learn to accept himself for who he truly is. Hair bands and all.

I’d like to thank LGBTQ Reads for giving me the opportunity to talk about my book and why I decided to set it during the 90s.

When I started writing The Mixtape to My Life, there were certain things I knew I wanted. First, that it was going to be a Young Adult story. Second, that I wanted it to be set in South Texas. Then third, and most important, I wanted it to take place during the 90s. It’s not that I didn’t think that I wouldn’t be able to write a novel set in today’s world, it’s just that I thought if I were able to tap into the feelings I had as a young gay kid growing up in 90s era South Texas, then it might make the main character and all his pent up emotions feel more authentic. But it did make me wonder that if my novel is set in the 90s, would today’s YA audience be able to relate? The answer is yes, because even though it’s a different time, some things never change.

One of the main motivations I had for writing a YA novel was the fact that even though we have made great strides in this world towards LGBTQIA+ acceptance, there are still places where many young people feel the need to hide who they are. The fear and uncertainty of what might happen if they came out is a frightening thought. Some go on with their lives, while others pray and pray that they will change and become what others consider to be “normal.”

I thought, maybe, just maybe if they saw that someone in a different time went through the same thing and came out of it okay, then maybe it might give them hope. That’s why it doesn’t matter if they don’t know what Teen Witch is or know the words to Welcome to the Jungle by Guns N’ Roses. Emotions are universal despite the time frame. So is hope. That’s what I wish for people to feel when they read this: hope.

One thing that maybe make people uncomfortable about The Mixtape to My Life is the use of homophobic and racial slurs that bullies in the book hurl at Justin, the main character. Some of them are quite harsh and could cause a negative reaction in someone. Trust me, I thought long and hard about whether or not to use them. But in the end, I felt that the story would lose something without it. I heard them on almost a daily basis, and while those slurs may not be as accepted as they were before, they are still used against many in the gay community. A queer teen who hears them as much as I did needs to see that someone can overcome this and find true acceptance. Like I mentioned before, I want that shy queer kid who feels alone to know that no matter what people throw at them, there is still hope that things will get better. You can find people who accept you, and you don’t have to change who you are to have that.

So yes, despite possible unfamiliar cultural references, I do feel that today’s YA audience can relate to a book set during the 90s. The techniques may be more advanced in this current age, but bullying is still bullying, and we can all relate to the hurt that it causes.

Jake Martinez is a former South Texas resident who has found a new home in Chicago. He has been writing all his life but has only recently sought to be published. His debut novel, The Mixtape to My Life, reflects on life as a gay teen growing up in South Texas. Jake holds an MFA in Creative Writing and also loves to write plays and screenplays. Aside from writing, you can find him hanging out at home with his husband, their newborn son, and an eclectic group of fur babies.