Please welcome author Taylor Ramage to the site today to talk about erasure and her recently released poetry collection, Lest I Know Your Weakness. Before we get into the post, here’s a note from the author on the book’s actual crafting:

I made this poetry collection by taking words, phrases, and letters from the 1872 novella Carmilla and reorganizing them into poems. That’s what erasure or blackout poetry is in a nutshell–transforming the content of an existing text into something new.
Although Carmilla does have undeniable lesbian representation, it was still written in 1872 by a white man and has a tragic ending like we’ve seen on some mainstream TV shows that kill off their wlw characters. But creating erasure poetry from this old text allows Laura and Carmilla’s narrative to be reclaimed and redeemed, even though it’s certainly still angsty. It’s another form of adaptation, much like the webseries “Carmilla,” only I’ve created new meanings from the original text provided on the page. I think this ability to apply a very contemporary form of poetry to old texts can result in reclaimed narratives for all kinds of marginalizations.

How cool is that?? So now, let’s get to the book and to the post! 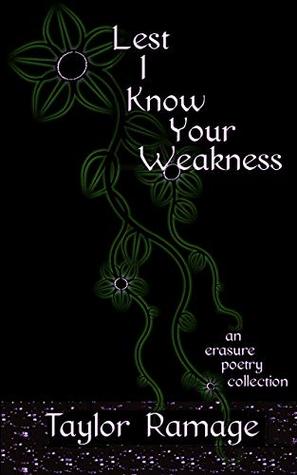 A twisted love story told in alternating poetic snapshots.
Intrigue, tension, darkness, beauty–Carmilla and Laura experience it all as they traverse the ups and downs of their relationship through poetic dialogue. Love is alluring and terrifying.

Erasure is often something that happens to us, especially if we embody marginalized identities. History, culture, someone standing in front of us, or even we ourselves will not recognize a part of our humanity, ignore our contributions, or categorize us with labels that wilt the nuances of our beings. Erasure imposes. It takes away in an instant and across a lifetime.

But what if, in one sliver of life, we could harness the power of erasure to reclaim the narratives handed to us?

This is the potential of erasure poetry, a poetic form in which you start with an existing text, then pull out words, phrases, and letters until you’re left with a poem. I used this form to create my new poetry collection Lest I Know Your Weakness. I crafted poems from the text of Carmilla, a novella written in 1872 and one of the first vampire books to exist in English literature. This story is both undeniably gay and undeniably written by a white man in a culture whose sensibilities had to align the sapphic with the grotesque and the horrific. Laura and Carmilla’s relationship is deep, eerie, strange, and haunting throughout the book, yet the frame narrative around it presents it as unnatural and tragic. Poor, innocent Laura got whisked away by this seductive monster!

And of course, the monster dies in the end.

I don’t need to repeat the litany of wlw couples who don’t get happy endings due to death or some other tragedy. That narrative runs deep in history and culture as shown with old books like Carmilla. Yet the beauty about that book being published in 1872 is that now it’s in the public domain.

This means anyone can do whatever they want with the text without any copyright restrictions. It’s why we have the Carmilla web series that adapts the story into a contemporary college setting and reclaims it from the tragic spectacle it originally was.

I’ve done something similar with my poems. Now, the original words of the book are reorganized and reframed into poems that alternate between Laura and Carmilla’s perspectives. I approached this old text with the entire context of my life and sensibilities, and chose what to take and form into a new(ish) story.

I did set some limits for the sake of following a form. For instance, I took screenshots of the text to give myself “pages” that restricted the words I could pull from for any given poem or idea. The sentence or two I got from each page became entire poems or stanzas that I later grouped together.

While I engaged with the old language of this book and pulled out what appealed to me, I also harnessed the power of erasure to reclaim the narrative of this couple. It can be strange, angsty, and a tad spooky. But it doesn’t have to be yet another tragic queer story.

The potential for applying such a contemporary form of poetry like this to old texts creates endless opportunities for people with marginalizations of all kinds to recenter stories written about them. A Native American poet could create erasure poems from Lewis and Clark’s journals, or a black poet could make poetry from texts written about abolition during the Civil War. In fact, Poet Laureate Tracy K. Smith has written erasure poems from texts like the Declaration of Independence, evoking this very concept of reclaiming the past.

Erasure poetry allows us to actively engage with ideas of the past while creating new meanings from them. The public domain is filled with thousands of old stories. Source material is bountiful and waiting to be erased.

Taylor Ramage is the author of two poetry collections, Forgive Us Our Trespasses and Lest I Know Your Weakness. She also writes fantasy, enjoys stories in all forms, and leads an active, healthy lifestyle. You can follow her on Twitter @TaylorRamage and Tumblr at taylorrama.tumblr.com. You can also catch her writing updates on her WordPress blog.