There are only a few exceptions to the rule that all books covered on the site have to have main characters who ID under the LGBTQIAP+ umbrella, and one of them is Mother’s Day, when queer parents—even of allocishet characters—get to take center stage.

Today, in honor of Mother’s Day, Joanne Rocklin is here to discuss her new MG, Love, Penelope, in which the main character has two moms. It’s set in 2015, against the backdrop of the marriage equality Supreme Court ruling, and it released on March 20 of this year, so you can already grab a copy via B&N, Amazon, IndieBound, or Book Depository!

Take it away, Joanne! 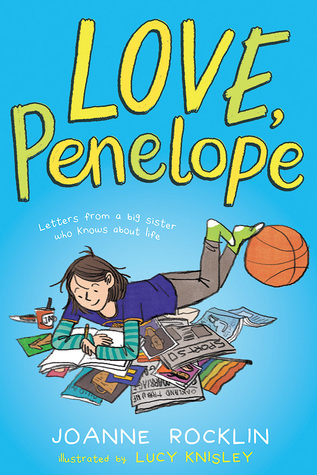 My middle grade novel, Love, Penelope is a story told in letters to an unborn sibling, by an eleven year old Oakland girl with two mamas. “How did you come up with that idea?” I’m asked, more often than you want to know.
So I often say that the idea began with two huge, wondrous, peaceful, joyous celebrations, days apart.

The first was on June 19, 2015, a parade for the Golden State Warriors who had just won the National Basketball Association championship for the first time in over half a century. Oakland exploded with joy and pride for “their” team.

The second celebration was on June 26, 2015, when the Supreme Court made same-sex marriage legal throughout the land, and the happiness was palpable throughout the world.

And so, along comes Penelope to tell us her story. Penelope, a fervent Warriors fan. Penelope, who loves her city and hates the fact that San Francisco, not Oakland, is called THE CITY (as in, “I went to The City on Saturday.”)  Penelope, who wants her parents to marry because her family is just as good as anyone else’s, so why not?

But often, very often, (again, more often than you want to know) I get this response from my questioner: “Well, how nice, Joanne. How really, really nice that you decided to write a story helpful to kids in that situation!”

Uh, no. That’s not what I decided to do.

Second of all, Penelope’s voice simply swept me away, and that’s why I wrote it. She is curious, she is often humorously wrong, but mostly right, about things she observes. She is bursting with mixed-up feelings, true to her age. She tells a lie about her heritage, and is riddled with guilt. But mostly, she is joyful. She, too, is “born” into this complicated world as she figures things out in letters to the baby. It was just absolutely pure FUN for me to write her story.

What is “that situation”, exactly?

Here is Penny’s situation, as Penny explains to someone who says her family is “not right”. On the first Monday of every month, the family tries a new flavor of ice cream. Sundae Mondays! Her parents have some nifty, fun ideas, but when they mess up, they listen and learn and grow with their daughter, and apologize. Holidays and sports teams are celebrated noisily with family and friends, and birthdays observed with reverence. There are homemade greeting cards for every occasion and sing-a-longs, and warm stews and cups of tea offered to anyone who needs them. There is lots and lots of giving- including forgiveness.

But mostly there is a piercing awareness on everyone’s part, every second they are together, that they are lucky to have one another. An awareness that love, not DNA, makes a family, and how very, very much Penny and the baby are wanted. I have known and interviewed scores of families like Penny’s. They may not have observed Sundae Mondays, but love is always a common denominator.

So perhaps the book is helpful for anyone wanting a definition of a happy family and good parenting; a description of a family that is “just right.” Penny and her parents already know what that is. All I did was tell their story.

Joanne Rocklin is the author of many books for children, including The Five Lives of Our Cat Zook, which won the Golden Kite Award and was named to Florida’s Sunshine State Young Readers Award master list.