As you probably know from following this site, Erin Ptah has been a wonderful friend of LGBTQReads, providing us with killer webcomic recommendations. And so today, we’re here to support her, and specifically her Kickstarter for Leif & Thorn!

Hey everyone — I’m taking a quick break from recommending other people’s webcomics to talk about one of mine. The strip is Leif & Thorn, and it’s on Kickstarter right now raising funds for a full-color print collection of Volume 1.

To preorder a copy, visit kickstart.leifandthorn.com — or read on for more! 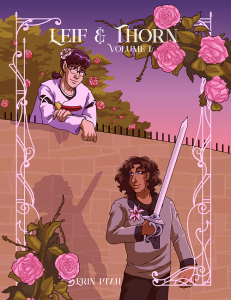 After Thorn Estragon killed a dragon, he and his team of knights expected to be put on a low-stress assignment to recover. Instead they’re sent to guard the embassy of neighboring Sønheim. (There’s a prophecy involved. He doesn’t know that part.)

As foreign countries go, Sønheim is extremely foreign. Different magic, strange food, everyone has pale skin (especially the vampires), and a lot of the labor is handled by indentured servants. Like Leif. He’s a gardener at the Embassy when Thorn arrives.

Thorn doesn’t speak Leif’s language too well at first, but he’s about to find a lot of reasons to learn.

These two are the heart of a broad ensemble of lovable characters, all facing their own struggles to communicate across cultural boundaries, deal with traumas and scars, use magic for practical solutions, and pick the perfect song for karaoke night.

In this volume: the party with the vampires, the hostage situation at the aquarium, the multi-species rescue effort after the mine collapse, and that incident with the tentacles.

For teens and up. (Don’t give it to small children — it includes adult topics like graphic violence, PTSD flashbacks, stalking, and health insurance.)

Leif & Thorn takes place on a non-Earth fantasy planet, so there’s no 1:1 portrayal of real-world ethnicities. Even the culturally-constructed concepts of identity don’t exactly map to ours. (Because I’m the kind of nerd who enjoys working out these things.)

But here’s an approximate summary:

Leif is bi/pan (his language doesn’t have separate words for the two). He comes from a snowy pole-spanning empire, with a culture heavily influenced by Sweden and Norway. He’s bilingual in sign language. And he’s internalized a lot of rhetoric about his country being the greatest in the world…in spite of economic inequality so bad that he’s become an indentured servant, working off a mysterious debt.

Thorn prefers men (that’s a translation of the appropriate word in his language). His native country is a temperate superpower, with influences from all kinds of cultures that aren’t “medieval or Renaissance Western Europe”, and his specific ethnic group reads as fantasy-Jewish. He deals with dragon-related PTSD throughout the story, plus some mobility issues from magical burn scars that will never fully heal.

For a snapshot of the diversity of the rest of the cast in this volume, check out the funding page.

There are other identities and issues that unfold in later storylines, too! (For more on that, check out the comic online.)

But as you might’ve picked up in my webcomic reviews, I feel strongly about representation being visible in the story. So I’m only selling you Volume 1 based on things that explicitly come up within its pages.

Kickstarter is a crowdfunding website, where people can band together to fund the production of things they like.

It’s widely used by comic creators who want to bring their work to print. A serious print run of a big fancy full-color book can cost a lot — but if you offer pre-orders on Kickstarter, you can raise all the funding upfront.

Backer options for Leif & Thorn Volume 1 include not just the book, but a whole range of tiers, each one with more incentives than the last. There’s something for every level of interest, from to “can’t afford the whole book, but I want to help make this happen” to “do you accept firstborn children??” (Answer: no, I don’t think PayPal can convert those.)

But here’s the important thing: Kickstarter fundraising is all-or-nothing.

If we reach our predetermined funding goal by the deadline — in this case, when the clock strikes midnight on October 17 — everyone gets their rewards! If not, all the backers keep their money, and the creator has to try again.

I’ve set a modest goal, covering a short print run. We shouldn’t have any trouble getting that far. And if you happen to drop by later in the campaign and see that it’s fully-funded, that’s the perfect time to jump in — because once we’re covered for the minimum run of books, all the extra funding can go into printing even more.

Click to back Leif & Thorn Volume 1 on Kickstarter now!

Erin Ptah likes cats, magical girls, time travel, casual representation, and webcomics. She’s the artist behind But I’m A Cat Person (it has four print volumes; you can just buy them) and Leif & Thorn (it’s the one to preorder here!). Say hi on Twitter at @ErinPtah.

Today on the site, we’ve got a cover and excerpt reveal for All Downhill From Here by Erin Ptah! This is a short spinoff story for the webcoming Leif & Thorn, but it’s a standalone AU; no previous knowledge of the comic is required. Here are the deets:

When a diplomatic conference gets derailed by an avalanche, native groundskeeper Leif and visiting knight Thorn end up buried together in the snow. The good news: Leif knows how to survive in the wilderness, and Thorn knows enough of the language to take directions. The bad news: a concussion, divided loyalties, malfunctioning magic, and any vampires that find them are legally allowed to eat them

Or: 13K words of fantasy survival hurt/comfort m/m, with translation difficulties, tangled loyalties, and romantic tension in between the mortal peril.

And here’s the cover!

They talk, for a little while, about safe topics. Nothing political. Nothing that has a real chance of killing either of them over the next few days.

At some point Thorn pulls out his smartcrystal, and Leif nearly melts with delight as he coos through the photos of Thorn’s cat. Some things are culturally universal.

With both of them inside the bedroll, it’s almost cozy. “I’ll take first watch,” says Leif presently, as Thorn is starting to get sleepy. “You should put your coat on back-to-front, so it’ll be open at the back, and we can put the heatpack between us while we’re spooning.”

“It…is. It’s the same word. Because spoons in a drawer, they’re like this….” Leif cups his gloved hands and sits them together, one inside the other. “Don’t you say that in Ceannic?”

He looks baffled when Thorn starts laughing — the first real laugh he’s had in what feels like weeks. “No, never! But maybe now I start.”

There’s a scramble as they rearrange their bodies and their clothes, so Thorn is facing the mouth of the tunnel with Leif hugging him from behind. The back-to-front coat means he can’t put his hood up, not without choking himself or at least getting a faceful of fur, so he gets to keep Leif’s scarf. Leif, meanwhile, nuzzles bare-faced against the back of his neck.

Especially if your companion is resourceful, and confident, and kind, and occasionally vulnerable, and unselfconscious about wrapping his arms around you to ward off the chill. Cute, too. Not that cuteness is the most pressing issue on Thorn’s mind right now…but he has noticed Leif’s snub nose and thin lips and pale, expressive skin.

He might even have said something, if not for be careful with the Sønska servants plus working up a sweat makes you more likely to freeze to death.

Best for Thorn to just keep quiet, no matter how much he likes the innocent “spooning.” (What a great word.)

“Is it only spoons?” he asks sleepily. “Can I also say that we’re forking?”

It’s his turn to be the baffled one, as Leif kinda splutters for no reason Thorn can figure out. “N-no, sir. That already means…something else.”

Ebook-friendly formats can now be preordered on Smashwords: https://www.smashwords.com/books/view/763085

A fancy illustrated PDF will be available December 20 on the website: http://leifandthorn.com/short-stories/