The Dark Beneath the Ice by Amelinda Bérubé (7th)

Something is wrong with Marianne.

It’s not just that her parents have finally split up. Or that life hasn’t been the same since she quit dancing. Or even that her mother has checked herself into the hospital.

She’s losing time. Doing things she would never do. And objects around her seem to break whenever she comes close. Something is after her. And the only one who seems to believe her is the daughter of a local psychic.

But their first attempt at an exorcism calls down the full force of the thing’s rage. It demands Marianne give back what she stole. Whatever is haunting her, it wants everything she has—everything it’s convinced she stole. Marianne must uncover the truth that lies beneath it all before the nightmare can take what it thinks it’s owed, leaving Marianne trapped in the darkness of the other side.

Past Imperfect by Carrie Pack (9th)

This is the second book in the In the Present Tense series. 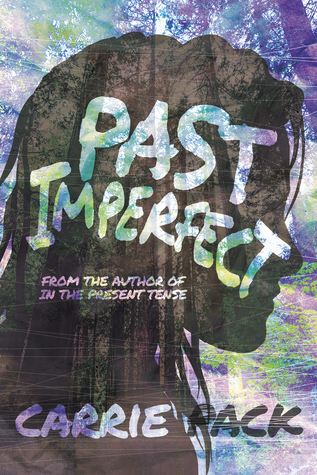 Now on the run from the corporation that turned him into a lab experiment, Miles finds himself in a fight for his life as he unravels the complicated relationships he shares with ex-boyfriend Adam, whom he still loves, and wife Ana, whose allegiance he cannot trust.

Meanwhile, nineteen-year-old Bethany Carter is on the run from her past and present. Having escaped the same institution that trapped Miles, she must find a way to safely manage the schizophrenia that triggers her time travel while navigating unpredictable bouts of paranoia.

As Miles’ and Bethany’s lives become more intertwined, Dr. Branagan, the man who made their lives a living hell at Longleaf Retreat, will stop at nothing to continue his research, even if it means destroying his subjects in the process.

Elena Mendez has always been career-first; with only two semesters of law school to go, her dream of working as a family lawyer for children is finally within reach. She can’t afford distractions. She doesn’t have time for love.

And she has no idea how much her life will change, the day she lends her notes to Cora McLaughlin.

A freelance writer and MBA student, Cora is just as career-driven as Elena. But over weeks in the library together, they discover that as strong as they are apart, they’re stronger together. Through snowstorms and stolen moments, through loneliness and companionship, the two learn they can weather anything as long as they have each other–even a surprise visit from Elena’s family.

From solitude to sweetness, there’s nothing like falling in love. College may be strict…but when it comes to love, Cora and Elena are ahead of the learning curve.

Darius the Great is Not Okay by Adib Khorram (28th)

Darius Kellner speaks better Klingon than Farsi, and he knows more about Hobbit social cues than Persian ones. He’s about to take his first-ever trip to Iran, and it’s pretty overwhelming–especially when he’s also dealing with clinical depression, a disapproving dad, and a chronically anemic social life. In Iran, he gets to know his ailing but still formidable grandfather, his loving grandmother, and the rest of his mom’s family for the first time. And he meets Sohrab, the boy next door who changes everything.

Sohrab makes sure people speak English so Darius can understand what’s going on. He gets Darius an Iranian National Football Team jersey that makes him feel like a True Persian for the first time. And he understand that sometimes, best friends don’t have to talk. Darius has never had a true friend before, but now he’s spending his days with Sohrab playing soccer, eating rosewater ice cream, and sitting together for hours in their special place, a rooftop overlooking the Yazdi skyline.

Sohrab calls him Darioush–the original Persian version of his name–and Darius has never felt more like himself than he does now that he’s Darioush to Sohrab. When it’s time to go home to America, he’ll have to find a way to be Darioush on his own.

This is the second book in the Mask of Shadows duology.

As Opal, Sal finally has the power, prestige, and most importantly the ability to hunt the lords who killed their family. But Sal has to figure out who the culprits are before putting them down. Which means trying to ignore the fact that Elise is being kept a virtual prisoner, and that the queen may have ulterior motives.

And the tales coming out of north are baffling. Talk of dark spirits, missing children, and magic abound. As Sal heads north toward their ruined homeland and the lords who destroyed everything, they learn secrets and truths that can’t be ignored.