Please welcome to the site today Michael Williams, author of gay sci-fi detective novel A Fall in Autumn, which just released in January. He’s here today discussing Queer Identity vs. Queer Behavior, and how that conversation is relevant to his work. So before we get to the post, here’s the book info: 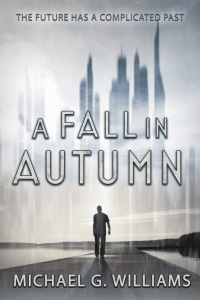 WELCOME TO THE LAST OF THE GREAT FLYING CITIES

Soaring miles over the Earth, Autumn, the sole surviving flying city, is filled to the brim with the manifold forms of humankind: from Human Plus “floor models” to the oppressed and disfranchised underclasses doing their dirty work and every imaginable variation between.

Valerius Bakhoum is a washed-up private eye and street hustler scraping by in Autumn. Late on his rent, fetishized and reviled for his imperfect genetics, stuck in the quicksand of his own heritage, Valerius is trying desperately to wrap up his too-short life when a mythical relic of humanity’s fog-shrouded past walks in and hires him to do one last job. What starts out as Valerius just taking a stranger’s money quickly turns into the biggest and most dangerous mystery he’s ever tried to crack – and Valerius is running out of time to solve it.

Now Autumn’s abandoned history – and the monsters and heroes that adorn it – are emerging from the shadows to threaten the few remaining things Valerius holds dear. Can the burned-out detective navigate the labyrinth of lies and maze of blind faith around him to save the City of Autumn from its greatest myth and deadliest threat as he navigates his feelings for his newest client, the handsome golem Alejandro?

Valerius Bakhoum, the narrator and protagonist of my new far-future sci fi detective novel A Fall in Autumn, is what’s called an Artie: an Artisanal Human. His mom and dad made him the old-fashioned way, which is unusual in the far-future world I strive to depict. Most people are some sort of “plus,” designed to be perfect from the start and given the benefit of routine genetic tuneups and treatments to stay that way, or they’re uplifted animals, given just enough sentience and a purpose-built design to do a specific set of tasks. Unlike them, Valerius grew up on a reservation for unmodified humanity. Kept away from specific technologies, constantly told they were special and important in a way others were not, they were treated like the Svalbard seed bank for human DNA. Their culture keeps them there just in case the geneticists of that time manage to royally screw things up and, like a writer after a bad cut and paste job, need to restore from an earlier backup.

Valerius is also gay, and disreputable, and a former street hustler, and a runaway, but I really wanted his experience as an Artie to speak to that first one. I wanted to depict the queer experience as an identity and not necessarily as a set of behaviors.

They say “write what you know,” right? They’re wrong, but they say it, and I certainly drew on some aspects of my own experience when working on this novel. I grew up in a remote part of Appalachia surrounded by real instances of all the bad stereotypes.  Racism, misogyny, and homophobia abounded. From a very early age I knew I would have to get out and go elsewhere to make a life, and I did just that. It didn’t matter that they told me it was about what queer people do. I knew I had already transgressed by virtue of who I was. I wanted to talk in a very explicit way about that sense of being the semi-invisible other. I wanted that alienation – and the drive to find a place he can call home – literally written into his DNA.

That’s the thing about our culture’s growing awareness of identity, right? Queerness isn’t something we do, though it may light the path to one or another set of actions. There’s no sexual activity threshold we have to meet or exceed to be queer, as the aces among us have been trying to tell us for years. Being queer isn’t like getting a driver’s license or sitting the bar: no study guide, no test to pass, no lab results to confirm. I have friends who are bisexual and have only had experiences with a single gender. Their bisexuality is still valid because it’s who they are, not a curriculum vitae. We just are queer, and we know it deep in ourselves, and in my experience that has shaped absolutely every interaction and relationship I’ve had in my life.

The society of A Fall in Autumn is in theory an egalitarian one offering full citizenship and equality under the law to all the many forms humanity has come to take. In practice, though, it’s plagued with the same inequalities in privilege, access, political clout, and financial resources as ours. Mannies – human-animal hybrids – are kept essentially as slaves. Plusses get all the goodies. And everyone can spot Valerius as an Artie the second they see him. He has laugh lines. His hair is starting to gray. He has an old scar on his face. In Valerius’ world, normal people never have those problems. Everything about him pisses someone else off, and everywhere Valerius goes he is fetishized or reviled – or both. It doesn’t matter to them who he is. It matters to them what he is. The ones who love him have pigeonholed Arties as admirably quaint, like the genetic equivalent of evangelical virgins, with purity rings and chastity pledges and the sort of doe-eyed wholesomeness that describes the butt of a gag out of an old Looney Tunes cartoon. They’d like to freeze him in amber, like Jurassic Park in reverse, to keep him pure forever. The ones who hate him think Valerius is less than they are and way too big for his britches. Why do Arties get to live in their own place and have religious types coo and fawn over them? And why is Valerius wasting all that privilege and goodwill by running around out in the regular world with the rest of the herd? What’s a living religious relic doing working cheating-boyfriend cases for the sorts of clients who can afford to pay but not much?

As queer people, I firmly believe we’re in the same position. Look at the way our society treats us: they pass transphobic “bathroom bills” while they revive Queer Eye and Will & Grace. They have an idea of what we’re about, what our experiences may be, but that idea is something they received from a source other than us and is entirely about our outer lives rather than our inner ones. They pick up these opinions and pass them around, often without the benefit of actually knowing any of us. When they find out about us – when we share with them this most basic element of who we are, of our outlook on the world, the medium by which we receive ever relationship of ever type for the rest of our lives from the moment we realize it about ourselves – it changes us in their minds. Sometimes that change is welcome, sometimes not. Some of them would sentence us to literal death for the sin of tempting them to freedom; others to a life behind the bars of social expectation in a prison of forever being the Gay Best Friend & Neighbor. Neither take has a lot of room in it for the social and spiritual clutter of being a person who’s alive.

The ‘phobes will always try to emphasize that dichotomy between identity and action, of course, to justify themselves, but they’ll do so on the other side of it. From the Briggs Initiative to HB2, they’ll say they hate us because they believe we’re predators. I have a theory, though, and it explains why we don’t have to do anything at all other than make a cameo in their fevered imaginations.

They’re scared of our willingness to question the script we were given, to assert that who we are is something different from what we were told we could be. It points out their own failure to do the same. We and they all heard the same stories growing up, that there was one acceptable identity, one pre-approved future, and we waved that off and decided we could do better for ourselves.

What if things could have been better for them, too?

That freedom and power of spirit is our greatest strength, though, and we should never forget that. Those bisexual friends who’ve always and only had relations and encounters with a single sex? By coming out, even if only to a few friends, even if only to themselves, they have made the world a little bit freer. Their queer children will thank them. Their queer hearts will beat longer and stronger unchained from fear.

By being true to ourselves we become beacons in the darkness leading others to their own truths about their own identities. And there are people for whom Valerius has been that, too. One of my publisher’s editors referred to Valerius as “tragic,” but to me his story is uplifting. Valerius knew who he was and what he wanted to be, and he took all the risks in the world to chase it.

Is there any better standard for success?

Does any other form of victory really matter? 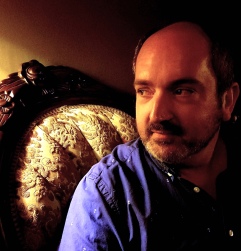 Michael G. Williams writes wry horror: stories of monsters, macabre humor, and subverted expectations. He is the author of two series for Falstaff Books: The Withrow Chronicles, including Perishables (2012 Laine Cunningham Award), Tooth & Nail, Deal with the Devil, Attempted Immortality, and Nobody Gets Out Alive; a new series in The Shadow Council Archives featuring one of San Francisco’s most beloved figures, SERVANT/SOVEREIGN; and the science fiction noir A Fall in Autumn. Michael also writes short stories and contributes to tabletop RPG development. Michael strives to present the humor and humanity at the heart of horror and mystery.

Michael is also an avid podcaster, activist, reader, runner, and gaymer, and is a brother in St. Anthony Hall and Mu Beta Psi. He lives in Durham, NC, with his husband, two cats, two dogs, and more and better friends than he probably deserves.

One thought on “Queer Identity: a Guest Post by A Fall in Autumn Author Michael Williams”