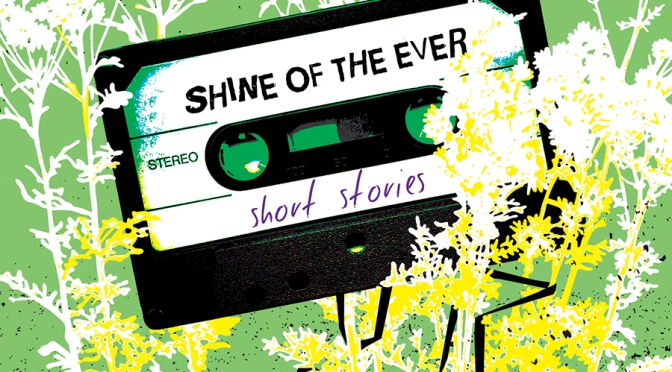 As a well-documented fan of music coming out of PNW in the 90s, I’m so thrilled to revealing the cover on the site today for Shine of the Ever by Claire Rudy Foster, a collection of short stories that “explores what binds a community of queer and trans people as they negotiate love, screwing up and learning to forgive themselves for being young and sometimes foolish.” The stories feature a whole rainbow of representation, including people who identify as queer, bisexual, gay, lesbian, binary transgender, non-binary transgender, polyamorous, asexual, pansexual, and genderfluid.

NOW, is there any better format for mashing the best things together like a mix tape?? And that’s what makes this cover, designed by C.B. Messer, so perfect!

Shine of the Ever comes out on November 5th, 2019 from Interlude Press

But wait, there’s more! In addition to the cover, we have an exclusive excerpt from the short story that gave the collection its name, “Shine of the Ever”!

We spent most of the winter in and around my apartment, which overlooked a boring section of southeast Belmont, before the cafes and PNW-inspired restaurants moved in. My rent back then was five-hundred-fifty dollars a month. It had hardwood floors, a bedroom, pocket doors, and a view of Mount Tabor. My neighbors were older people who had been there since the 1980s. I was the youngest person in the building, young enough that I was the only one who didn’t have a player for the tapes the other tenants swapped in the laundry room “library.” I only had a binder of CDs. I didn’t buy a lot of music, because at the time the rent I paid was considered kind of high. Since then, it has more than tripled. I’m pretty sure my old neighbors are all out in the Numbers now. I’m just saying. I don’t live there anymore. Nobody I know does, but there’s never a vacancy. Explain how that works. Where the hell do all these new people come from? At least the weather hasn’t changed. That winter with Ada, it mostly rained, but one day snow piled like popcorn in the gutters, and on another morning a white fog, so muffling that we couldn’t even see the mattress company storefront across the street.

We were a we, an actual couple. We did relationship things. Ada went to her classes at Portland State, and I went to my library job, but we always met up at the end of the day. She didn’t want to spend time with anyone else, and I wasn’t bored yet, so it worked. She served me free beers when she picked up shifts at the Crow Bar. When school got too busy, she quit, and started bringing over a bottle of whiskey a couple times a month.

We went to places that are other places now. We shared beers at Blue Monk, which was a bar and music venue where you could hear actual good hip-hop and jazz musicians who didn’t play that gooey, elevator shit. The Blue Monk is called something else, and there’s a line out front with a doorman and a velvet rope. The people waiting are all dressed up. Lines were never a thing, back then. I associate never waiting with that time of my life, because the timing was always just magically perfect. Anything you wanted, you could have right then: brunch, beer, a turn in the horseshoe pit. Delayed gratification didn’t exist, when I was twenty-three.

Ada and I kissed in bars that are too clean for me now and too expensive. It’s bizarre, when I go back now and try to approximate the proportions of the places I used to know so well. I went to one of my old dives a few years after it closed, and only the ceiling was the same. Pipes and drywall, peeling paint, that was all. Everything else, from the lighting to the tinted mirrors over each booth, was styled. The weird thing was, the place was styled to look like Old Portland. My Portland. They spent a fortune trying to do it too. The matching frosted globes that hung from the exposed rafters would run at least four hundred apiece. A matched set in such good condition must have cost a mint. The tables were tropical salvage. I had that feeling I was in a movie set of my own living room, where every object looked exactly like my personal possession, but nicer, cleaner, and more appealing. I hate it. These designers put in a lot of effort to make things seem natural, but I think the only people who believe it are the ones who never saw the original. They don’t understand that this isn’t Portland anymore: it’s Portlandia. A theme park of the places we used to love.

If you have no point of reference, you are very easy to fool.

Claire Rudy Foster is a queer, trans single parent in recovery. Their short story collection, I’ve Never Done This Before, was published to warm acclaim in 2016. With four Pushcart Prize nominations, Claire’s writing has appeared in McSweeney’s, The Rumpus, and many other journals. Their nonfiction work has reached millions of readers in The New York Times, The Washington Post, and Narratively, among others. Claire lives and writes in Portland, Oregon.