Today on the site I’m excited to welcome Nino Cipri, author of the brand-new Homesick, which just released from Dzanc Books on Tuesday! It’s a short story collection that spans speculative, sci-fi, fantasy, and horror, with all sorts of queer/trans rep, including queer, bisexual, lesbian, gay, transfeminine, transmasculine, nonbinary, and bigender. Here’s the official blurb: 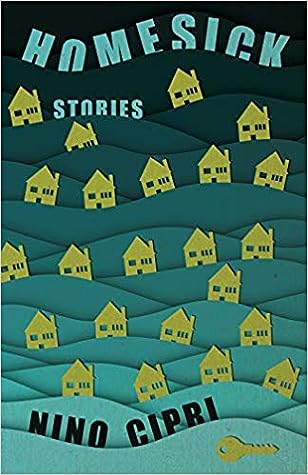 Dark, irreverent, and truly innovative, the nine speculative stories in Homesick meditate on the theme of home and our estrangement from it, and what happens when the familiar suddenly shifts into the uncanny. In stories that foreground queer relationships and transgender or nonbinary characters, Cipri delivers the origin story for a superhero team comprised of murdered girls; a housecleaner discovering an impossible ocean in her least-favorite clients’ house; a man haunted by keys that appear suddenly in his throat; and a team of scientists and activists discovering the remains of a long-extinct species of intelligent weasels. Nino Cipri’s debut collection announces the arrival of a brilliant and wonderfully unpredictable writer with a gift for turning the short story on its ear.

We’re celebrating the release with an excerpt from the novella “Before We Disperse Like Star Stuff,” which you can learn more about here:

Three years ago, Damian Flores, Min-Ji Hong, and Ray Walker made the discovery of a lifetime: the fossilized remains of a long-dead species of intelligent weasels, who had a developed language and writing system. Their find helped redefine ideas of sentience and saved parts of Pine Ridge from natural gas extraction. Three years later, however, Damian can’t shake the suspicion that he’s a sellout, Min can’t find a post-doc fellowship despite co-discovering a non-human language, and Ray is languishing in boredom in a small Kansas college town. When an opportunity to film a documentary about their discovery arises, the three former friends must reckon with secrets, drunken apologies, baby otters, and the bullshit colonial underpinnings of archeology.

(Rep notes for anyone curious: Damian is Latinx, transmasculine, and queer. Min is a transwoman and Korean-American. Ray Walker is Lakota and bisexual. )

And here’s the excerpt!

Ray’s flat Midwest accent always made Damian think of hollow logs rolling down a hill. It was unmistakable and weirdly attractive.

“I was hoping to talk to you,” Damian answered. Ray had grown his hair out and wore it tied back in a messy bun, wavy tendrils escaping in the wind. Damian instinctively wanted to tuck them back behind Ray’s ears.

“Hell of a drive from New York City, just for a conversation,” Ray said. “Why didn’t you call?”

“You changed your number.”

Ray rolled his eyes. “Min still has my number. You could have gotten it from her.”

He hadn’t even thought of that. Why were Min and Ray still talking to each other and not to him? He was the connection between them, the common denominator. He’d assumed that they’d all lost touch at the same time, after he’d announced his book deal and they looked at him with betrayal instead of excitement. “I’ve got a proposition for you,” he said to Ray. “I figured you’d be less likely to turn me down in person.”

Ray huffed—not quite a scoff, but too annoyed to be a laugh. “Good to know you’re still a manipulative shit.”

“I guess I deserve that,” Damian said quietly. He absolutely deserved that. Even now, he was calculating how much hurt to allow into his voice and vigorously hating himself for it. He wanted to be a good person, but he wanted to do good work more. This documentary was good—ergo: all was fair.

His office was, of course, his truck, and if the sight of it had been a punch to the gut, stepping into it was like getting reverse-suplexed into the past. Same threadbare fabric on the seats. Same clatter of coffee cups rolling around the footwell. Same dusty dashboard, with the word BUTTS etched into the leather near the passenger window—a gift from one of Ray’s nephews. Ray had attempted to turn it into the word BURTS, supposedly in honor of Reynolds and Kwouk, but with meager success.

It was horrible. Damian only liked the past when it was a minimum of six hundred years old.

“The good old Buttsmobile,” he said.

“It’s the Burtsmobile, damn it,” Ray muttered. “What’s your proposition?”

“The Smithsonian wants to make a documentary about ossicarminis.”

“Adapt your book, you mean?”

“Not just the book,” Damian said. “They optioned it as an actual documentary about ossicarminis, finding and identifying them, the whole thing with NEOCO.” He wasn’t going to go into the Space Weasels. He could only have one crisis of conscience at a time.

“And what happened after? Our falling out? Or only the part of the story that makes you look good?” Ray asked. He’d always been blunt. Damian used to like that about him.

“Is that what you call it?” Damian asked, honestly interested. “A falling out?”

Ray shrugged. “That’s what other people call it when they’re trying to ask me what happened.”

“Falling out,” Damian said again, testing the words. Like it was natural law, rather than two stubborn assholes roleplaying an unstoppable force meeting an immovable object.

“I told them I wouldn’t do it without you and Min,” Damian said. It wasn’t quite a lie; assuring Annika that Ray and Min would definitely sign onto the project was basically the same thing. “The two of you are the story. More than me. I just got lucky by falling in a cave.”

Damian waited him out, toying with the iron pendant his mother had made him in a smithing class.

“I don’t want to rehash the whole thing, man,” Ray said eventually. A nice blush was spreading across his cheek. “Not what happened between us. That stays off camera and in the past.”

“I am one hundred percent okay with that,” Damian said, and knew it was a lie as soon as he said it. He had fallen into a fast, consumptive love with this nerdy asshole and his terrible khakis, his probably lethal caffeine habit, and his utter disinterest in being tactful. Their so-called falling out hadn’t changed that. He had planned on avoiding Ray forever, but he’d come around to the idea that this could be his second chance. That’s why he’d actually driven to this godforsaken prairie infested with Elvis-themed restaurants. They’d wanted the same thing, after all: to spread the word about ossicarminis, to make people understand the gravity of this discovery. They had disagreed loudly and angrily on how to do that, and Ray had dumped him.

And then he’d grown out his hair, which just seemed unfair.

“You grew out your hair,” Damian said, like the lovesick dumbass he was.

Ray ran a self-conscious hand over it. “I told myself I would when I got tenure. When they couldn’t fire me for looking ‘unprofessional.’” The word dripped with sarcasm. “Not sure if that meant too gay or too Indian. The chair never specified. Both, probably.”

The familiarity was a physical ache; Damian thought of the feeling of taking off his binder after a day of wear, stretching his shoulders back after hunching them for hours. It was unfair, it was exquisite, and it felt like pressing hard on a bruise that he’d successfully ignored for the past year and a half.

Nino Cipri is a queer and trans/nonbinary writer, editor, and educator. They are a graduate of the 2014 Clarion Writers’ Workshop, and earned their MFA in fiction from the University of Kansas in 2019. Their fiction collection Homesick won the Dzanc Short Story Collection award, and their novella Finna–about queer heartbreak, low-wage work, and wormholes–will be published by Tor.com in 2020. A multidisciplinary artist, Nino has also written plays, screenplays, and radio features; performed as a dancer, actor, and puppeteer; and worked as a stagehand, bookseller, bike mechanic, and labor organizer.

One time, an angry person on the internet called Nino a verbal terrorist, which was pretty funny.