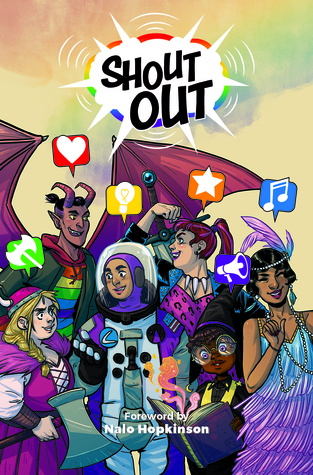 Join us on the adventures of young demon hunters, star-crossed Viking lovers, and cyberpunk street artists as we invite you into new worlds where brave heroes with diverse queer identities demonstrate the strength of their hearts and the power of their dreams!
Inside this book you’ll find eighteen LGBTQ2SIA+ stories crafted by award-winning international creators. Find your place alongside ace necromancers, glamorous jazz musicians, fey outsiders, friendly monsters, and a superhero still finding his way out of the phone booth.

Spotlighting the work of diverse voices, this collection includes Kieron Gillen (The Wicked + The Divine), Kelly & Nichole Matthews (Lumberjanes/Gotham Academy), Vivian Ng​​ (Legend of Korra: Turf Wars), and many others.

Our stories have heroes who are gay, lesbian, bisexual, transgender, non-binary, gender non-conforming, two-spirit, and asexual, from creators who share those identities.

Find it on Goodreads

Excerpt from SHOUT OUT: “Show Me Your Teeth” written by Angela Cole, illustrated by Cheryl Young

1. What influenced your style for Show Me Your Teeth, and what parts were the most fun to draw?

Cheryl: I like to think of comics as a fun, enjoyable experience to not only read, but visually enjoy. If I have fun drawing the expressions of the characters as they interact with each other, my hope is the readers will too!

Angela: I’m pretty shy and socially awkward in real life and I appreciate it when someone takes the time to explain things when I make a mistake, especially if it’s about something important to them. I wanted a story where the characters could talk about gender honestly and without judgement. Di makes a mistake but is earnest and wants to understand Kaoru, and Kaoru explains their gender and what it means to them in words I hope someone else can understand, too.

2. Why do monsters and fantasy hold so much appeal for you?

Cheryl: Monsters and fantasy are only a small extension of the world we live in, just adding a little extra fantastical element alongside the real world we face every day. It can mean a lot of things to people, yet also very little. It’s interesting to see people’s interpretations of that and see that we’re not all that much different.

Angela: I think that monsters are the manifestations of our own ignorance of the world and they’re very important in the history of all cultures. They represent the terrible unknowns in every society, whether it be a natural phenomena or a person who is different, and I’ve always had a deep love for the outcasts and misunderstood. Also, I just think they’re pretty neat. I wanted to incorporate monsters from different cultures in this story and it was incredibly difficult to choose which would appear. As for fantasy, there’s so much freedom and possibility in it. Growing up, fantasy was my go-to safe space I would retreat into whenever things got too difficult.

3. Which fictional heroes inspired you as a child?

Cheryl: I didn’t have any as a child, but I really enjoyed playing the Pokémon Mystery Dungeon series. Just the fantasy RPG role playing aspect of the game along with the storytelling got me really immersed in the world as a player. Consuming various media with fantastical creatures and worlds made me want to create the same thing now in my work.

Angela: Wonder Woman was absolutely the first and remains top. There was also She-Ra, Storm (of Marvel), Elisa Maza from Gargoyles, the unicorn and Molly Grue (The Last Unicorn), and many others I am forgetting. Wonder Woman, Storm, and She-Ra are obvious choices for a young girl, but Elisa was the first biracial character I had seen in something I religiously watched, and she was friends with monsters! The unicorn and Molly are opposite sides of the same coin in the story and I like to say that I wanted to be the unicorn when I was little, but I grew up to understand Molly more.

4. What modern piece of queer media do you wish had been a part of your childhood?

Cheryl: Bisexuality and non binary spectrums being explored, as well as allonormativity being dismantled and more diverse characters being celebrated for just being friends instead of love interests.

Angela: Steven Universe. I grew up in a time bereft of queer media for children and it would have been game-changing to have had something as inclusive and beautifully sincere as Steven Universe.

5. What are you working on now, and where can readers find more of your work?

Cheryl: I’m working on building my universe of Hong Kong and Japanese inspired environments through visual storytelling, found on my twitter (@cysketch)

Angela: I have a spooky comic about a story from my family to be published in the Local Haunts Anthology with beautiful art by Anastasia Longoria! I also have a few pitches in the works.