As you can proooobably tell, I know LGBTQIAP+ YA better than anything else, so I’m still catching up to the rest, but I do know today’s got some cool-sounding releases in other categories, so check out this variety of new releases out today!

Levi Grainger needs a break. As a reality show star, he’s had enough of the spotlight and being edited into a walking stereotype. When he returns home after the last season of Trip League, he expects to spend time with his family, only to learn his sister is coming back from her deployment in a flag-draped casket. Devastated, Levi decides the best way to grieve will be to go off grid and hike the Appalachian Trail—a trip he’d planned to do with his sister.

His solitary existence on the trail is interrupted when he meets Thad, a quiet man with a hard body and intense eyes. Their connection is stronger than anything Levi has ever experienced. But when Levi discovers the truth about what Thad is hiking to escape, their future together looks uncertain, and uncertainty is the last thing Levi needs…

The Yelp: A Heartbreak in Reviews by Chase Compton 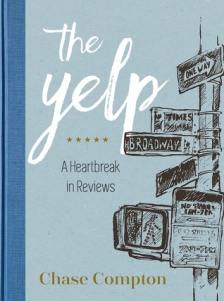 When Chase Compton met the love of his life at a dirty dive bar on Manhattan’s Lower East Side, he had no idea how far from comfort the relationship would take him. Their story played out at every chic restaurant, café, and bar in downtown New York City. Ravenous hunger, it seemed, was their mutual attraction to one another—until suddenly the appetite was spoiled, and Chase was left to pick up the pieces of a romance gone wrong.

Left high, dry, and starving for affection (and cheeseburgers), Chase turned to an unlikely audience in a moment of desperation: Yelp.com. Detailed in the Yelp reviews is the story of how to survive a broken heart. Every meal and cocktail shared is a reminder of times spent with the ever elusive “Him.” In recounting the bites devoured and the drunken fits of passion that propelled the relationship, the author chronicles his whirlwind relationship with the man of his dreams, revisiting the key places where the couple ate, drank, and fell in and out of love in the West Village and beyond.

The Yelp is a memoir of personal transformation and self-realization, or more simply—a memoir of food and love, played out on a map of modern Manhattan’s culinary scene. The book includes the original twenty-eight Yelp reviews, with interwoven narrative chapters that provide context, insight, and delight to Chase’s story.

The Other Boy by M.G. Hennessey 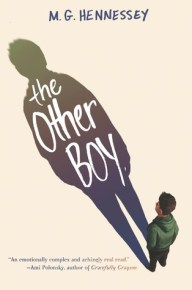 Twelve-year-old Shane Woods is just a regular boy. He loves pitching for his baseball team, working on his graphic novel, and hanging out with his best friend, Josh. But Shane is keeping something private, something that might make a difference to his teammates, to Josh, and to his new crush, Madeline. And when a classmate threatens to reveal his secret, Shane’s whole world comes crashing down. It will take a lot of courage for Shane to ignore the hate and show the world that he’s still the same boy he was before. And in the end, those who stand beside him may surprise everyone, including Shane.

Celosia Brennan was supposed to be a hero. After a spectacular failure that cost her people their freedom, she is offered a once-in-a-lifetime chance at redemption. Together with a gifted team of rebels, she not only sets her sights on freedom, but defeating her personal demons along the way.

Now branded a failure, Celosia desperately volunteers for the next mission: taking down the corrupt Council with a team of her fellow elementally gifted mages. Leading the Ember Operative gives Celosia her last hope at redemption. They seek to overthrow the Council once and for all, this time bringing the fight to Valeria, the largest city under the Council’s iron grip. But Celosia’s new teammates don’t trust her—except for Ianthe, a powerful Ice Elementalist who happens to believe in second chances.

With Council spies, uncontrolled magic, and the distraction of unexpected love, Celosia will have to win the trust of her teammates and push her abilities to the breaking point to complete the Ember Operative. Except if she falters this time, there won’t be any Elementalists left to stop the Council from taking over not just her country, but their entire world.