Today on the site I’m psyched to have the incredibly prolific and wonderful Robin Stevenson! As it happens, I wasn’t the only one with the idea to shine a light on her this time of year; right after I asked Robin if I could interview her for August, a great interview with her went up on Gay YA, so make sure you check that out too!

You’re such an impressively prolific author, with over 20 books to your name now. How long have you been writing, and can you give us a little rundown on your books with LGBTQ narrators?

I started writing on maternity leave, soon after my son was born— which was thirteen years ago. My first book came out a couple of years later, in 2007. It began as a short story that grew and grew, and ended up as a YA novel called Out of Order. The main character, Sophie, is a sixteen year old girl who dealing with a history of being bullied, struggling with an undiagnosed eating disorder, and caught up in the orbit of a charismatic but troubled new friend. She is bisexual but not yet using this word… she is just beginning to realize she is attracted to girls.

My novel Big Guy came out the next year, and also has a queer narrator—-this time a teenage boy who is in an online relationship with another guy. It was my first hi-lo novel in the Orca Soundings series. (My most recent book in the series came out in 2016, and also has a queer narrator: It’s called Under Threat, and deals with anti-abortion violence. I wanted to write an unambiguously pro-choice novel that shows the cost of anti-abortion fanaticism. The main character, Franny, has a girlfriend called Leah and they are together throughout the novel—the book was an ALA Rainbow list selection.)

In 2009, my YA novel Inferno came out— this one was also an ALA Rainbow list selection, which I was delighted about. The narrator is a queer teenage girl who has recently broken up with a girl with whom she was in a very closeted relationship. When the book begins, she has just cut off all her hair and changed her name from Emily to Dante, and she is about to meet a new group of friends who are going to complicate her life in interesting and challenging ways. Dante seemed to provoke strong reactions; readers either adored her and really related to her, or disliked her intensely! Personally, I adore her.

My newest book also has a queer narrator: It is a mystery/thriller called Blood on the Beach. I co-wrote it with Sarah N. Harvey, who is a senior editor at Orca, and was in fact my editor for a number of my novels and my non-fiction book Pride. Blood on the Beach is told in the alternating voices of two first person narrators: Sarah wrote from Caleb’s point of view, and I wrote from the point of view of Alice, who is bisexual.

Your most recent book, Pride, has received all sorts of award nominations, including a 2017 Stonewall Honor. What was the research experience for that book like? 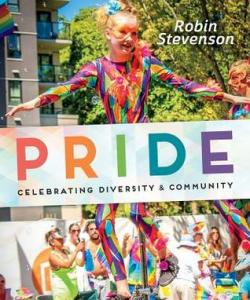 Pride was my first non-fiction book, and the research and writing process was entirely new to me—so different from fiction. I read a lot, and watched documentaries, and sifted through archival photographs, but I also spoke with so many people about their experiences of Pride. And from activists in Russia and Uganda to 12 year old kids here on the west coast, everyone was so helpful and interested and enthusiastic. People shared their opinions and stories and personal photographs, and read drafts, and gave feedback. It felt like a very collaborative process and one that strengthened my own sense of connection to the LGBTQ community.

Do you have your own personal favorite Pride memory?

I’ve been going to Pride for 30 years so I have accumulated a lot of really great memories; I can’t pick just one! Here are a few that stand out: Going to my first-ever Dyke March with friends in Toronto, back in 1991. Seeing my parents walking in the Pride Parade with PFLAG a few years later. Taking my son to his first Pride when he was only a month old. Speaking about the history of Pride to teens at youth-organized events. Reading at Pride in the Word, which is my favorite literary Pride event ever. And this year, taking my spaniel puppy to Pride Victoria’s Big Gay Dog Walk!

You do the very cool work of writing Hi-Lo books for Orca, which, for those unfamiliar, are “high interest, low reading level” books. How did you specifically get into Hi-Lo, and how does the writing process differ for you from your other books? 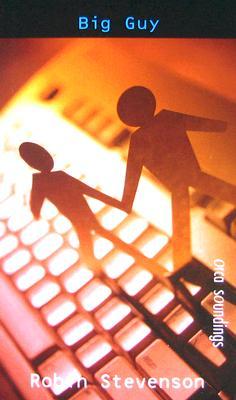 I got into it entirely by accident. I’d written a short story for adults, which got way too long—novella length, really, around 15,000 words. It was about a gay teenager who lied his way into a job working as a caregiver in a residence for adults with disabilities, and I had no idea what to do with it. I’d just published by first YA novel with Orca, and I knew they had this series called Soundings that were about that length…and so I thought I’d tweak it a bit and try submitting it for that series. That story became my first hi-lo novel, Big Guy. I have written five books in that series now—they are fun to write, and they are a great writing exercise for me: because the word count is so tight, they force me to consider every word to make sure it is absolutely necessary and to work hard to make each scene serve multiple purposes (eg. developing character, building tension, furthering the plot). My writing process is a bit different for hi-lo…I’m not usually much of an outliner, but– with the exception of that first accidental hi-lo novel, of course– I outline all my hi-lo novels in a fair bit of detail before I begin.

I think hi-lo books reach a lot of kids, for a lot of reasons, and some of my favorite reader emails have come from kids who have read these books. They meet a real need, helping kids to gain confidence and to see themselves as readers—plus they are just fun, quick reads. I also edited hi-lo books for Orca for three years: the Limelights series, which are books about teens in the performing arts. It was very enjoyable work and I learned about everything from stand-up comedy to aerial silks!

I saw on Twitter you’re working on a book now about reproductive justice. Is that your next publication, and what can you tell us about that?

Yes! I am so excited about this. It’s scheduled to be published in spring 2019, in Canada and the US, and it’s aimed at older kids and teens. To be honest, after Pride came out, I wasn’t planning to write another non-fiction book—but the ongoing attack on abortion rights and access in the US is so disturbing, and the current threats to reproductive choice under the current administration are so serious, and there is so much propaganda and misinformation being taught to young people about abortion. And even in Canada, where the landscape with respect to abortion looks quite different than in the US, most kids have no idea of the long battle that was fought to legalize abortion and make it accessible. It seemed like such an important topic for kids to be aware of, and yet there aren’t a lot of kids’ books on the subject. So I proposed this book idea to Orca, and—being awesome—they agreed!

You’re a Canadian author, and I think we in the U.S. often miss a lot of the great titles that come out of Canada, the UK, and Australia that aren’t published here. What are some titles that haven’t crossed the border that you think should be getting way more attention on this side?

One Canadian book that I recently read and was very impressed by was a debut novel by a young author, Arushi Raina. It is called When Morning Comes and it is published by Tradewind Books. The story is set in South Africa and follows the lives of four young people during the student uprisings of 1976; it is well-researched, beautifully written, and very powerful. It was published in Canada in 2016 and has just been published in the US this year—I highly recommend it.

In terms of LGBTQ books more specifically, some Canadian authors whose books I love include Carrie Mac, Ivan Coyote, Tom Ryan, Mariko Tamaki, and M.E. Girard. And author Heather Smith has a new YA novel coming out this spring which includes queer characters… I just read an ARC and absolutely fell in love with it. It is called The Agony of Bun O’Keefe, and I’m very much hoping it will get all the attention it deserves on both sides of the border.

In your interview with Gay YA, you talked about writing the complexities of queer theory to a younger (Middle Grade) audience, and reminding yourself “this isn’t a university text.” What are your favorite texts on it for older audiences, and could you ever see yourself writing one that is a university text?

I love reading about queer history, and have devoured just about everything that’s crossed my path. When it comes to writing, though, my first love is fiction—and I am really looking forward to getting back to working on my middle grade novel, to a YA novel I am co-writing with a friend, and possibly also working on some short fiction for grown-up readers. No university texts in my plans!

According to your bio, you are quite well-traveled! Does that play into any of your books now, and will we see it playing into any in the future?

My partner Cheryl and I have been together 20 years, and we’ve travelled a lot together. One of the most amazing trips we have taken was the year that we spent living aboard a small sailboat and travelling from Lake Ontario, through the barge canals to New York, then down the waterways and offshore to Florida and the Bahamas. Ten years after our journey, I read over all our logbooks and used my memories of the winter we spent sailing in the Bahamas as the basis for my YA novel, A Thousand Shades of Blue. The characters and their story (and all the angst) is fictional, but the route they travel and all of the places they stay are entirely real—as is much of the scene where their boat runs aground on the rocks near Joe Sound on Long Island. It’s probably my favorite of my YA novels because it is so closely connected to so many wonderful memories for me and Cheryl.

I am working on a teen novel now that is mostly set in Australia, a country where I lived for a year as a teen and another year as a young adult– I actually came out as queer while I was living in Australia, aged 21. But most of my novels are set in BC, as this is the place I know and love best.

Please drop your thanks to Robin for dropping by, and make sure you check out
her books!

Robin Stevenson is the author of twenty books for kids and teens. Her novels include The World Without Us and The Summer We Saved the Bees, as well as the Silver Birch Award-winner Record Breaker, and the Governor General’s Award finalist, A Thousand Shades of Blue. She lives in Victoria, British Columbia. For more information, visit http://www.robinstevenson.com.