Take Me Home by Lorelie Brown

Something in the Wine by Jae

Who’d Have Thought? by G. Benson

It’s Thanksgiving month in America, so for November’s backlist book (but actually novella) of the month, I had to go with a personal favorite that revolves all around the holiday…and a woman who hires a fake date to accompany her home for it and pretend to be her girlfriend. As all great fauxmances do, this one turns into a whole lot more, and…le happy sigh. Enjoy Take Me Home by Lorelie Brown this Thanksgiving! 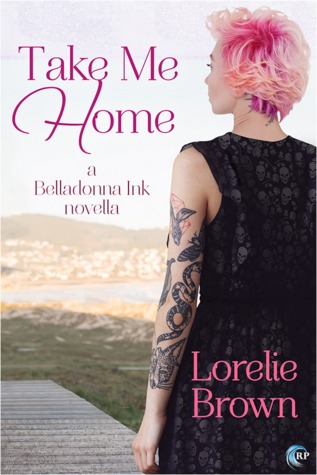 Thanksgiving arrives in one week and one day. Feeling hemmed in by parental expectations? Are they disappointed by your sapphic proclivities? I can help! The only pay I want is the holiday meal!

I didn’t know what I was looking for until I saw her Craigslist ad.

I love my family. I’m lucky to have them — well, most of them. But my aunt? I’m so tired of her giving my mom crap because I happen to be a lesbian. So one pink-haired tattoo artist pretending to be my girlfriend will annoy my Christian fundamentalist aunt right back and make my Thanksgiving perfect.

Only . . . Brooke turns out to be cuter and more complicated than I expected. And before you can say “yorkiepoo,” we kiss . . . and abduct a dog together. I want to keep them both — but Brooke isn’t the kind to be kept. Lucky for me, I’m the kind to chase what I want.

Not Otherwise Specified by Hannah Moskowitz (bi YA)

The Art of Starving by Sam J. Miller (gay YA)

Love and Other Carnivorous Plants by Florence Gonsalves (queer YA)

Bonus: For a romance that reads demisexual but isn’t officially so on the page, try Second Position by Katherine Locke.

November always seems to be a pretty quiet release month, so I’m just gonna toss a bunch of stuff on my radar (which includes lots of genre f/f!!) together in one post and hopefully you’ll find something fabulous!

Imogene Hale is a lowly parlourmaid with a soul-crushing secret. Seeking solace, she takes work at a local hive, only to fall desperately in love with the amazing lady inventor the vampires are keeping in the potting shed. Genevieve Lefoux is heartsick, lonely, and French. With culture, class, and the lady herself set against the match, can Imogene and her duster overcome all odds and win Genevieve’s heart, or will the vampires suck both of them dry?

When Marian Banner moves to the glittering city of Nottingham with her father, Sir Erik the Fortunate, her entire life changes. She is no longer allowed to run about the countryside in trousers and braids, climbing fences and shooting turkeys, but is thrust into a life of dresses and jewels and dancing lessons, none of which Marian is particularly pleased about. Her dark mood changes when she meets a tiny whip of a girl called Robin Hood. Robin is fierce and brave, and wants more than anything to become a knight, regardless of her gender. Together they explore the city, becoming fast friends along the way.

As time passes, their friendship into something bigger and scarier and far more wonderful. But then Marian’s father is killed in service to the king and she catches the king’s eye.

Can Robin save her one more? Or will Marian discover how to save herself?

Each week, Gabriel Romero’s drive to Sunday mass takes him past “El Ángel,” the golden statue at the heart of Mexico City that haunts his memories and inspires his future. Spurred by the memory of his parents, Gabriel is drawn to the secretive world of lucha libre, where wrestling, performance art and big business collide.

Under the conflicting mentorships of one of lucha libre’s famed gay exótico wrestlers and an ambitious young luchador whose star is on the rise, Gabriel must choose between traditions which ground him but may limit his future, and the lure of sex and success that may compromise his independence. Surrounded by a makeshift family of wrestlers, Gabriel charts a course to balance ambition, sexuality and faith to find the future that may have been destined for him since childhood.

Thanksgiving arrives in one week and one day. Feeling hemmed in by parental expectations? Are they disappointed by your sapphic proclivities? I can help! The only pay I want is the holiday meal!

I didn’t know what I was looking for until I saw her Craigslist ad.

I love my family. I’m lucky to have them—well, most of them. But my aunt? I’m so tired of her giving my mom crap because I happen to be a lesbian. So one pink-haired tattoo artist pretending to be my girlfriend will annoy my Christian fundamentalist aunt right back and make my Thanksgiving perfect.

Only . . . Brooke turns out to be cuter and more complicated than I expected. And before you can say “yorkiepoo,” we kiss . . . and abduct a dog together. I want to keep them both—but Brooke isn’t the kind to be kept. Lucky for me, I’m the kind to chase what I want.

In an alternate Victorian world controlled by clock towers, a damaged clock can fracture time—and a destroyed one can stop it completely.

It’s a truth that seventeen-year-old clock mechanic Danny Hart knows all too well; his father has been trapped in a Stopped town east of London for three years. Though Danny is a prodigy who can repair not only clockwork, but the very fabric of time, his fixation with staging a rescue is quickly becoming a concern to his superiors.

And so they assign him to Enfield, a town where the tower seems to be forever plagued with problems. Danny’s new apprentice both annoys and intrigues him, and though the boy is eager to work, he maintains a secretive distance. Danny soon discovers why: he is the tower’s clock spirit, a mythical being that oversees Enfield’s time. Though the boys are drawn together by their loneliness, Danny knows falling in love with a clock spirit is forbidden, and means risking everything he’s fought to achieve.

But when a series of bombings at nearby towers threaten to Stop more cities, Danny must race to prevent Enfield from becoming the next target or he’ll not only lose his father, but the boy he loves, forever.

The decision to stop dating has made Vaughn Hargrave’s life infinitely simpler: he has friends, an excellent wardrobe, and a job in the industry he loves. That’s all he really needs, especially since sex isn’t his forte anyway and no one else seems interested in a purely romantic connection. But when a piece is stolen from his art gallery and insurance investigator Jonah Sondern shows up, Vaughn finds himself struggling with that decision.

Jonah wants his men like his coffee: hot, intense, and daily. But Vaughn seems to be the one gay guy in Toronto who doesn’t do hookups, which is all Jonah can offer. No way can Jonah give Vaughn what he really wants, not when Jonah barely understands what love is.

Dani Perez, a secular Israeli working as a software engineer in Boston, has never had trouble balancing his faith and his sexuality—until he meets Avi Levine, a gay Orthodox Jew and sign language interpreter. As they fall in love, Dani finds himself wanting Avi in his life but confused by Avi’s observance. Dani can’t understand how Avi reconciles what his religion demands with what his body desires. And although he wants to deny it, neither can Avi.

Despite the risk of losing Avi forever to a religious life that objects to their love, Dani supports him through the struggle to find an answer. Will they be able to start a life together despite religious ideology that conflicts with the relationship they are trying to build?

Of Fire and Stars, by Audrey Coulthurst (22nd)

Betrothed since childhood to the prince of Mynaria, Princess Dennaleia has always known what her future holds. Her marriage will seal the alliance between Mynaria and her homeland, protecting her people from other hostile lands. But Denna has a secret. She possesses an Affinity for fire—a dangerous gift for the future queen of a kingdom where magic is forbidden.

Now, Denna must learn the ways of her new home while trying to hide her growing magic. To make matters worse, she must learn to ride Mynaria’s formidable warhorses before her coronation—and her teacher is the person who intimidates her most, the prickly and unconventional Princess Amaranthine (called Mare), sister of her betrothed.

When a shocking assassination leaves the kingdom reeling, Mare and Denna reluctantly join forces to search for the culprit. As the two work together, each discovers there’s more to the other than she thought. Mare is surprised by Denna’s intelligence and bravery, while Denna is drawn to Mare’s independent streak. Soon their friendship is threatening to blossom into something more.

But with dangerous conflict brewing that makes the alliance more important than ever, acting on their feelings could be deadly. Forced to choose between their duty and their hearts, Mare and Denna must find a way to save their kingdoms—and each other.

All her life, Serafina Talarico has searched in vain for a place where she and her mystical talents belong. She never found it in Rome—the city of her birth—where her family’s Ethiopian origins marked them as immigrants. After traveling halfway across Europe to study with Alpennia’s Royal Thaumaturgist, her hopes of finding a home among Margerit Sovitre’s circle of scholars are dashed, for Serafina can perceive, but not evoke, the mystical forces of the Mysteries of the Saints and even Margerit can’t awaken her talents.

When Serafina takes lodgings with Luzie Valorin, widowed music teacher and aspiring composer, both their lives are changed forever. Luzie’s music holds a power to rival the Mysteries, and Serafina alone has the vision to guide her talents. For sorcery threatens the fate of Alpennia—indeed of all of Europe—locking the mountains in a malevolent storm meant to change the course of history. Alpennia’s mystic protections are under attack and the key to survival may lie in the unlikeliest of places: Luzie’s ambition to write an opera on the life of the medieval philosopher Tanfrit.